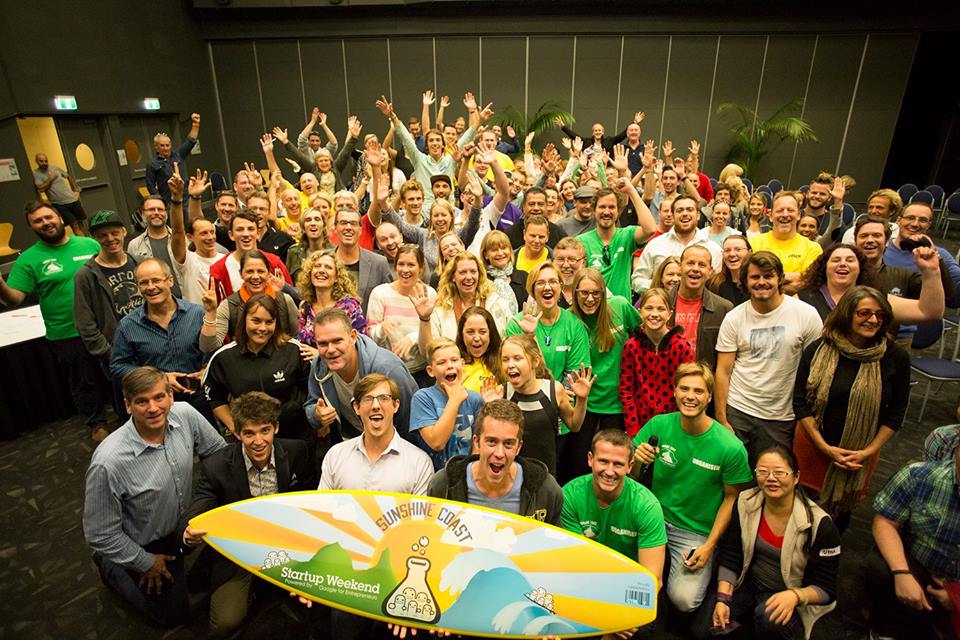 Have you ever thought about going to one of those crazy 54-hour-long events known as a Startup Weekend?

The ones where you spend all weekend with a cohort of strangers who, like you, want to see what starting a startup is all about.

What started in Boulder, Colorado in 2007, now attracts upwards of 200,000 participants a year and after participating in the Sunshine Coast’s first Startup Weekend in May this year, I can see why.

Here are just two reasons why…

1. It taught me to talk to strangers early

Following the teachings of Lean Startup guru Steve Blank, Startup Weekend required you to get out from behind your work desk and go talk to ‘strangers in the street’ about your team’s concept.

In my case, I went to our local shopping centre. I asked people if they: (a) liked our team’s idea; (b) would be willing to pay for our team’s idea; and (c) how much they would pay for the idea.

As expected, nearly all of the 47 strangers I spoke to liked our team’s idea. Who wouldn’t? It was an idea (by someone in our local search and rescue industry) that was designed to improve the safety of people who lived alone or whose partner was often away.

But what was really eye-opening for me was that despite my enthusiasm, only 1 person out of 47 said they would be willing to pay for the product.

Once I took that data back to our team, slowly but surely we came to a consensus that the concept wasn’t viable (given our projected expenses). We tried to pivot the concept, but we couldn’t seem to pivot enough for us to believe that we could make it work.

Coming to that conclusion so early in the business planning process was a priceless lesson on how critical it is to talk to potential users as soon as possible, to enable you to pivot, or to can your concept early – before you invest your life savings or mortgage your house.

If some of us had followed that principle in our own business lives, we’d have saved ourselves thousands of dollars that could have still been in our pockets today.

2. It opened my eyes to my local startup community

Without big names like Google, Apple, Microsoft or Facebook gracing the streets of the Sunshine Coast here in Queensland, Australia, it’s easy to think that we have no startup community here and/or no technology success stories.

But I learnt that’s not the case.

Startup Weekend introduced me to not only a bunch of ambitious dreamers like myself, but to a network of experienced startup people who were running successful companies here on the Coast (like Ben Duncan from Atmail), had worked in Silicon Valley, had built or been instrumental in successful companies (and eight-figure exits), raised venture capital, and/or were themselves VCs or angel investors – looking for great local ideas.

So much talent and experience right here on my doorstep!

And everyone I met was so friendly and generous with their time and advice. Some of them volunteered as Mentors that weekend – giving up their valuable weekend time – 7am to 11pm each day. Many of them invited us to contact them after Startup Weekend if we needed any advice or guidance with any of our future business ideas.

But it didn’t stop after Startup Weekend.

The momentum carried over into bi-monthly meetups – and it seems that at each of those meetups, more and more talented advisors and entrepreneurs are coming out of the woodwork and offering to help.

I’ve tapped into that help and benefited greatly (as have many others) from the advice of so many smart people right here in my local community.

If I hadn’t gone to Startup Weekend, I never would have known how invaluable my local startup community is here on the Coast and I would probably have still been slogging it out at my home desk, wishing I knew people here on the Coast to talk to.

Seen my 10 lessons from Startup Weekend?

If you’re still not sure about whether to ditch your weekend plans and go to the next Startup Weekend in your area, you might like to check out the article I wrote for Upstart Business Journal in July: 54-hours spent with entrepreneurial strangers: 10 lessons from Startup Weekend. (And no, they did not pay me, nor did anyone associated with Startup Weekend.)

In it, I said that Startup Weekend was “like a candy store for creative thinkers… Sure, you won’t see chocolate waterfalls, glass elevators or Oompa Loompas, but you might just score yourself a golden ticket to work in a team with the next Wonka, Jobs or Zuckerberg. And that sounds pretty sweet.”

And it’s so true. If you can get yourself along, I highly recommend it. Startup Weekend changed my life and if you let it, you never know, it could change yours too.