5 Handyman Tools and Tricks Shakespeare Would Have Loved 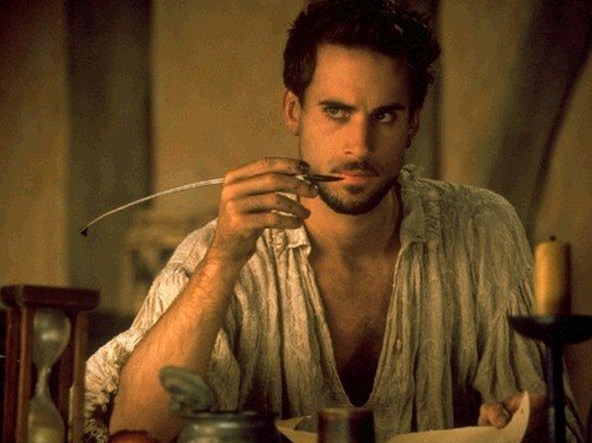 In the last days of the 16th century, Gutenberg’s printing press had changed the world, Shakespeare was writing Much Ado About Nothing and the scientific revolution was in full swing. For all the advances in technology, life for Shakespeare and his company of players was a struggle. He left his wife and children and the prospect of a good job working for his father to pursue his dream of acting and writing for the theatre. Had he chosen to stay in Stratford-upon-Avon and work for his father, it’s possible he could have been as handy with the bit and brace (the best in medieval drill technology) as he was with his quill.

Here are 5 modern handyman tools and tricks we think that Shakespeare would have loved:

1. Taming of the Screw

“Screw your courage to the sticking-place” Macbeth, Act I, Scene 7, Line 66

Although screw type mechanisms were common in Shakespeare’s day, the tools to mass produce metal fasteners were still more than a century away. Wood joints using dovetails and dowels were favoured for buildings like the Globe Theatre. Nails were the cutting edge technology of the day and even though they were each hand forged, they were produced in standard sizes. The one penny, two penny nail sizes we refer to today grew directly out of nails being used as a form of money in Medieval England. Interestingly, it wasn’t uncommon for a few to go missing during a performance.

Back in the time of Shakespeare, screws had to be meticulously cut by hand and were almost exclusively used for armour and early firearms. One problem with early wood screws that persists today is that they are difficult to remove – and often break off in the process. Threaded wood inserts are a very handy modern solution often used for sets and movable stages.

Threaded inserts allow bolts to be screwed into wood and later easily removed. If you have ever purchased furniture that came flat packed, you would be familiar with threaded inserts. Different designs accommodate softwood and hardwood. To install a threaded insert, simply drill the appropriate sized hole and screw the insert down until flush. If, as Shakespeare said, “all the world’s a stage”, then threaded inserts would have made it a lot easier to set it up and take it down.

Back before Medieval times, the Romans who occupied England set the standards for weights and measures. Once the empire fell, individual countries and even small regions developed their own way of measuring things. By the time Shakespeare took the stage, first as an actor and later as a dramatist and theatre owner, measuring things was a very mixed bag.

In the countryside, distances were measured by furlongs (short for furrow longs) determined by how long you could plough a furrow until your ox needed a rest. Other measurements like the hand and the ell (named after the elbow bone and measured as the length of an arm) also varied considerably. As men in Shakespeare’s time would be on the small side by today’s standards, doorways were shorter and ceilings were lower as well. It is well known that each structure built in Shakespeare’s time was a direct reflection of the builder, but we can only speculate what the work of a short contractor with a feeble ox would look like.

Shakespeare would have loved a digital laser rangefinder. These handy pocket sized electronic gadgets can be used in place of a tape measure and are typically accurate to within one to two millimetres. One big advantage with using a laser measuring device is that a single operator can measure distances like the length of a wall without a second person to hold the end of the tape measure. Laser measuring devices can also measure the height of a ceiling and by just standing under yonder window and pointing the laser, you’ll know exactly how long a ladder you need. Add it to the list of smart handyman tools! 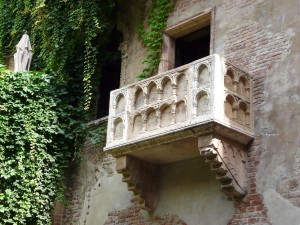 The famous balcony of Romeo and Juliet in Verona, Italy

“Shall I compare thee to a summer’s day?” Shakespeare 18.1

Writing good plays was important to Shakespeare, but having an ending that left the audience satisfied was a bigger challenge. Elizabethan theatre audiences were a rowdy bunch and the smell of overripe tomatoes could often be noticed above the stench of garlic, sweat and beer that emanated from the mass of groundlings. (The Groundlings were commoners, also referred to as stinkards, who packed the pit in front of the main stage.)

In Shakespeare’s time, comedies generally ended with the marriage of two unwed characters, while tragedies would offer up an ironic twist or an accumulation of bodies that would make even the Godfather blush. Straying too far from the formula was risky and if there were any loose ends, particularly unresolved romances or scores to settle, one of the players would hastily launch into a prologue to promise that all would be revealed in the next instalment.

The plays of Shakespeare and his colleagues were wildly popular and theatres sprang up like spring tulips just beyond the reach of city authorities, north of London’s official boundary. They did not have lighting, so plays were performed during the day and playhouses were designed to be open to the elements. Theatre was a speculative business, so many venues were built hastily. Wood preservation technology was crude and fire codes were non-existent, causing many playhouses to be lost to wood rot or fire. The Globe, which Shakespeare was a part owner in, burnt to the ground in just two hours after it ignited while firing a theatrical cannon in 1613. By the summer of 1614 it had been rebuilt and was back in business.

If the craftsmen of Shakespeare’s day had a better idea of wood preserving techniques, it may not have saved the Globe, but it would have kept several other theatres from succumbing to the ravages of time and rainy English weather. For outdoor wood projects like a deck, fence or Shakespearean stage, any professional handyman would know that the key to long life is sealing the end grain. Unsealed end grain tends to wick water into the fibres and hold it there. Once rot has taken hold, like a tired plot twist, it will just get worse. If you are building a new deck or replacing pieces of an existing deck make sure all your ends are sealed up tight.

Although Shakespeare managed to live to what at the time was an impressive age of 52, he was dogged by death throughout his life. During Shakespeare’s life, Medieval England was repeatedly ravaged by the bubonic plague or Black Death. While the cause of Shakespeare’s death is not certain, he is known to have lost three sisters to the plague when they were very young, as well as his 27 year old brother, Edmund. His most heartbreaking loss though was his only son Hamnet, who died from the plague when he was only 11 years old.

As well as the heartbreak that Shakespeare endured, each time a new outbreak occurred, the theatre was shut down. People that could afford it fled to the countryside while those that remained, huddled in their homes in fear. The cause, infected fleas that had bitten infected rats, remained a mystery for hundreds of years. If the plague wasn’t bad enough, Shakespeare wrote many times about the “ague” or fever that afflicted many people living around marshes and bogs. Scholars have concluded that the “ague” was in fact mosquito borne malaria, present in England during Medieval times.

While window and door screens would not be invented for another 300 years, the Medieval Latin word canopeum described what we now call mosquito net. Canopeum or canopies were used by many wealthy residents to keep gnats and mosquitoes away while they slept. Today, window and door screens are routinely used to control disease-carrying insects. Had they existed in Shakespeare’s time, they may have helped stem the tide of the plague and prevented many people from succumbing to the “ague”.

If a torn screen leaves you scratching and swatting, there are several quick fixes that will get you through a midsummer night. Small holes in nylon screens can be patched with a few drops of fast drying adhesive. For metal screens, you can try using epoxy. Slightly larger holes can be fixed using the same method to secure a patch just slightly larger than the hole. Cut away the ragged edges of the tear so you have a clean rectangular hole to apply the patch to. While holes larger than an inch or two will likely require you to replace the screen, you can secure them until morning using duct tape. Shakespeare would certainly have appreciated this secret handyman weapon. 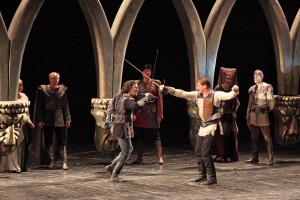 Scenes from a production of the Shakespeare play, Hamlet

5. The Comedy of Errors

Writing plays for a livelihood before the advent of copyright protection was an exercise in secrecy and stealth, as much as it was about skill as a playwright. To frustrate competing theatre companies from stealing popular plays, scripts were never distributed to actors. Lines were either given to the actors just before the play or whispered to actors from offstage during the performance in what was called “cue acting”. Mistakes were common and sometimes as hilarious as the written jokes.

Because copies of the play were so difficult to get, competing theatre troupes would reproduce the play based on the best recollection of a spy planted in the audience. There was considerable variation in how the plays were actually performed and copied versions were riddled with errors. Shakespeare himself is acknowledged to have often copied whole passages from earlier works and as he worked very fast and was also prone to errors in some finer plot details.

Computer driven numeric controlled milling machines, called CNC milling machines, have now automated the previously tedious task of copying designs in wood, plastic and metal. Until recently, CNC machines were found exclusively in large industry and specialised fabrication shops. But advances in technology have drastically reduced costs and made them well within the reach of a dedicated hobbyist or home workshop enthusiast. CNC mills working from 3D files can make precise error free copies of virtually any 3-dimensional form. While Shakespeare may not have gone in for his own CNC machine, there is little doubt he would have been no stranger to cut and paste.

The Theatre, or the Tool Shed…?

Had Shakespeare stayed home and gotten a real job, the world would have been deprived of one of its greatest writers.