If you don’t think you and your trusty lawn mower have the power to make a difference in your community, think again. Whilst a lawn mower and an able body might seem like standard pieces of equipment to a lawn mowing pro, they can represent insurmountable obstacles to the poor, disabled and elderly who cannot afford a lawn mower and/or whose bodies do not let them easily mow their lawn.

Yes, if you run a mowing business, you still need paid lawn mowing jobs. But wedged in between your scheduled appointments, maybe think about ‘paying it forward’ this year and using your lawn mower for some good deeds too?

In December 2015, Rodney Smith Jr founded an organisation called Raising Men Lawn Care Service to “restore the importance and understanding of giving back to the community. I want to show our children (our future) that by helping others they too will receive a sense of accomplishment, self-esteem, moral value, and purpose in themselves.”

Their goal was 40 lawns in two months. They mowed 100. And not long after, thanks to 20 committed volunteers, Rodney’s organisation had mowed over 300 yards for recipients in need, without recognition or fanfare.

But in April 2016, that was to change, when Rodney Smith Jr. uploaded a photo of him, his friend Terence, and their 93-year-old neighbour to Facebook, after they mowed her lawn. The good news story Facebook post went viral and eight months later, had received 1.2 million ‘Likes’ and 251,000 shares. 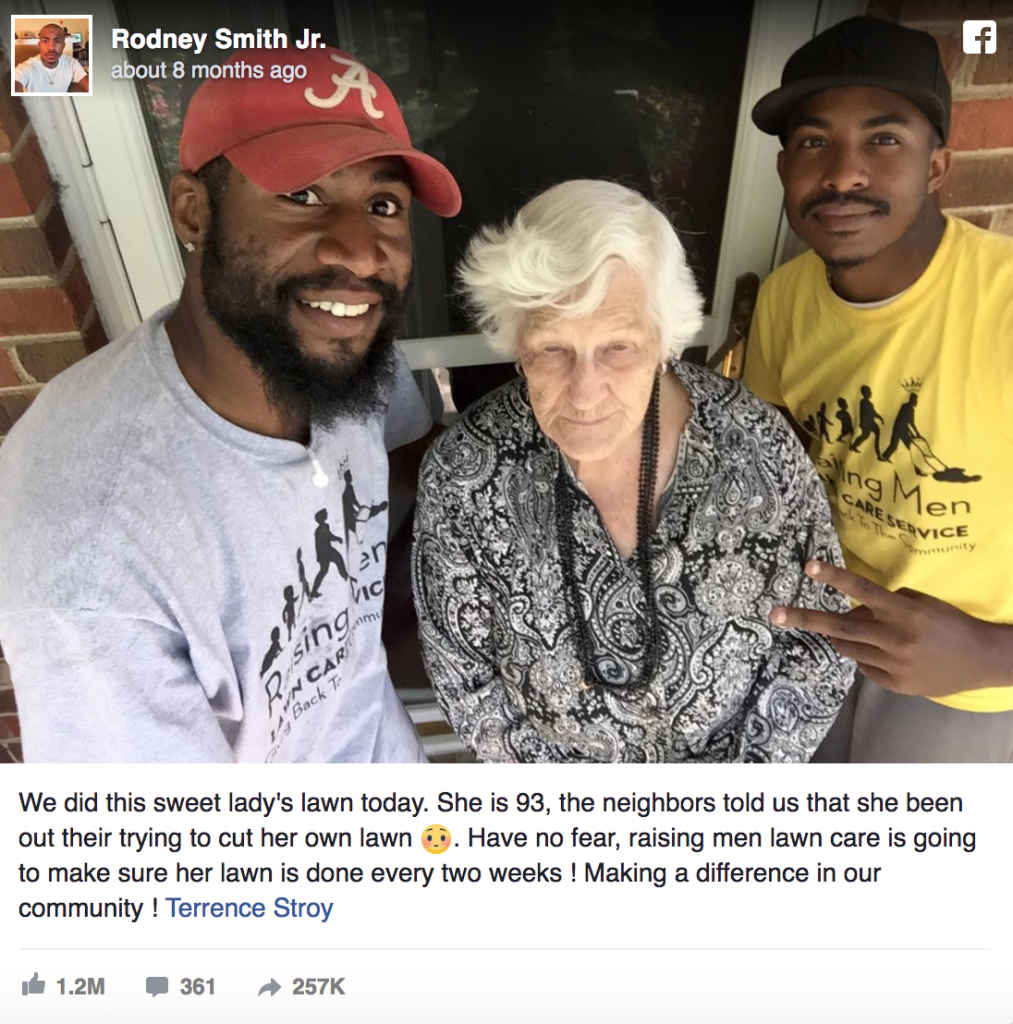 Fast forward to later that month and Rodney’s story became the subject of Briggs & Stratton feel-good video, to teach boys and young men the values of hard work and helping their community (and no doubt, to get a little publicity for the global lawn mower brand)…

2. Four youngsters save an elderly woman from jail

Four young brothers from Texas made headlines in June 2015, when they saw a KWTX news report about elderly woman Gerry Suttle (who had a police warrant issued for her arrest because the grass on one of her properties was too high) and decided to mow her lawn to save her from jail.

75-year-old Suttle told police that she never received a notice to appear in court, but the boys didn’t waste time debating the notice, they just piled into their parents pickup truck and were driven to the address mentioned in the news report, which was the land that Suttle owned across from her home.

Thanks to help from neighbours, the youngster had the lawn done within two hours and Suttle was moved to tears from the selfless act. Source

A photograph of a California EMT mowing the front lawn of an 86-year-old man who had fainted while doing yard work went viral Saturday as thousands of people shared the image on social media. Source

The man who fainted was not identified in reports, but his son shared the picture of the EMT mowing the Sacramento lawn on Facebook and wrote the following:

“My dad, born in 1929, won’t let us mow his lawn. He pushed too hard today and passed out. The neighbors saw and called 911… My sister and I came as soon as we heard…He was discharged last night and we just got back from a follow up visit with his doctor and he’s doing great… He has also promised to let us mow the lawn from now on!…” 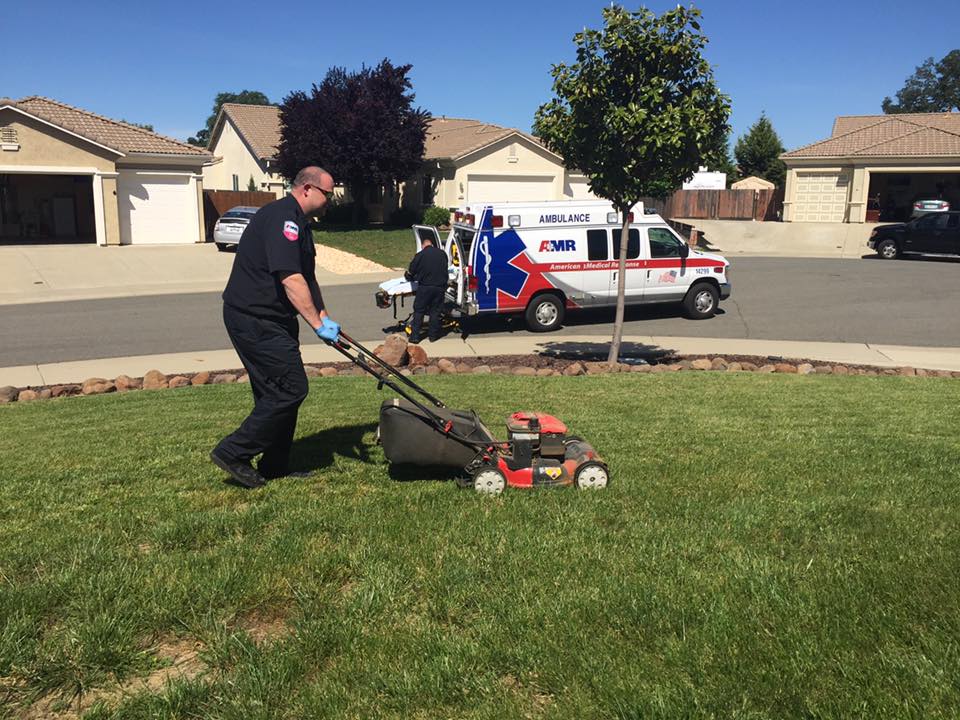 In May 2016, Jenny Brown reported on Shareably, the wonderful good news story of Christopher Garrett, an army war veteran who was shot in the lower abdomen while deployed overseas in Afghanistan, and as a result was forced to retire from the military due to injuries that left him disabled.

One morning, something beautiful happened. Chris entered the house with tears in his eyes. Brittany… noticed Chris was holding a note in his hand. When his wife, Brittany read it, she also burst into tears. The note read:

“I hope this saves time for the things that matter most in your life. Thank you for service and for my freedom.”

News of the generosity quickly spread when Brittany updated her Facebook page: “…Something AMAZING happened today! As I was getting ready for my day, my husband appeared at the door with tears in his eyes holding our son. My heart sank….He quickly assured me that no one had died, but someone had just given him a very expensive riding lawn mower! I don’t know who they are, but they have been watching my 100% combat disabled husband push mow our entire yard once or twice a week, and thought this would help make more time for the important things in life!!! THANK YOU WHOEVER YOU ARE!!!…” 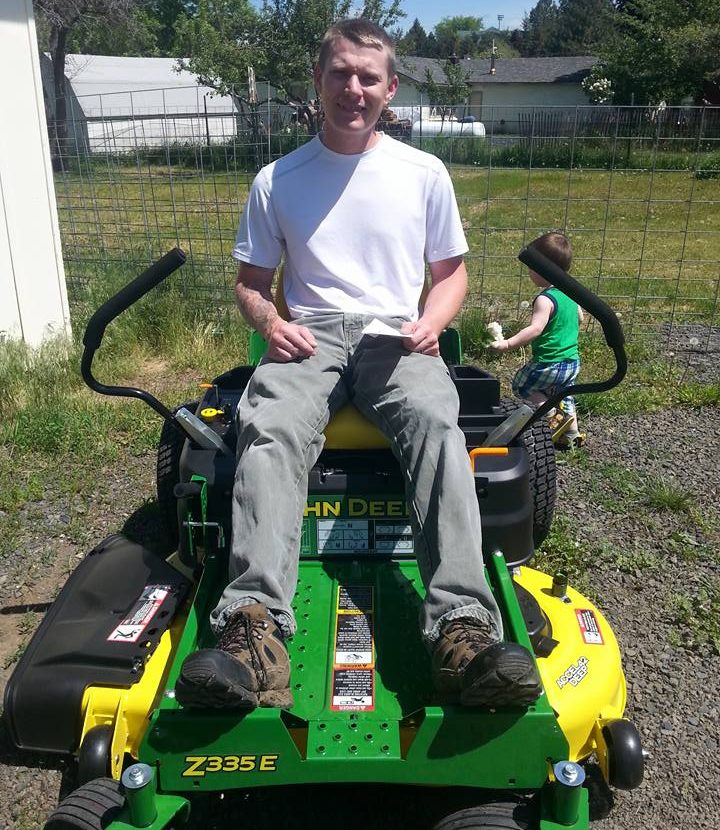 5. Mother mowing the lawn with baby in her arms helped by cop

Our final lawn mower good news story is about an American cop (yes, all the stories in the post are from the US… we need some more in the Press in Australia!) who saw a mother mowing her with a baby in her arms and unexpectedly stopped his police car and insisted on finishing her lawn!

Later that day, she posted on her Facebook: “Y’all I thought I was about to get in trouble or something for baby wearing while mowing but this sweet sheriff stopped and insisted on mowing my yard for me!” 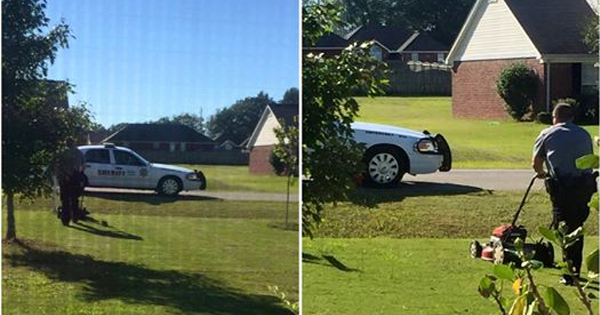