6 Home Improvement Projects You Can Build With LEGO 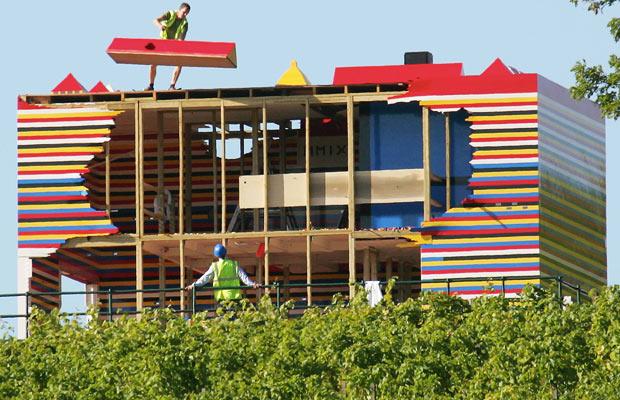 When we think LEGO, we think happy kids. The LEGO generation, fuelled by new research into ‘play as learning’ and encouraged to ‘learn by doing’, were allowed to let their imaginations run wild. And thanks to the proliferation of snap-happy parents sharing pictures of their kids with their creations on the Internet, we all get to share in the happiness that is LEGO. But is LEGO just for kids? Or are there really some home improvement projects you can build with LEGO, whether you’re a handyman or not?

Many kids who grew up playing with LEGO have been inspired to become builders, engineers and designers. Some, like artists Nathan Sawaya and Sean Kenney, work full time creating LEGO sculptures for travelling exhibitions and private commissions. Adam Reed Tucker, a Chicago based architect and one of only 11 LEGO certified professional builders in the world, makes amazing, massive replicas of the world’s tallest skyscrapers.

6 Home Improvement Projects You Can Build With Lego

It all started with “I wonder if”. Eric Harshbarger had a little (too much?) time on his hands and started wondering if he could build a life-size replica of R2D2 from Star Wars out of the LEGO bricks he had laying around from his childhood. The answer was “not quite” but $750 in bricks later he had completed his 3-foot tall model and his life as a professional LEGO builder began.

Since that first model in 1999, he’s had some many cool, and a few strange, projects. He has reproduced the Mona Lisa as a 48-square foot mosaic using 30,000 LEGO bricks. He’s built a bust of Late Night TV host Conan O’Brien and he’s made corporate logos for dozens of company trade show displays.

The LEGO desk, for a Seattle area tech company, was a condition of employment for a newly recruited executive. Among the facts about the desk that Harshbarger lists on his website are that it contains 35,000 bricks, weighs 120 pounds, has 7 working drawers and is 60-inches wide, 30-inches deep and 29.5-inches tall. The executive specifically wanted to leave the bumps exposed on top, declined to have his new company’s logo mosaicked into the desk and regarding how much he was paid Harshbarger simply writes, “It was worth my time.” 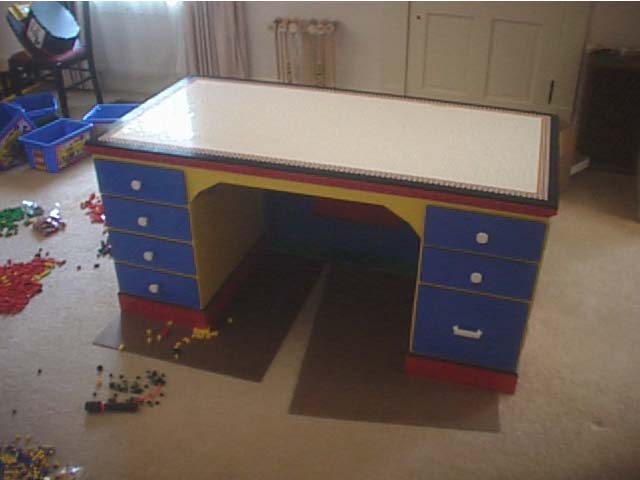 Eric Harshbarger has been a professional LEGO builder since 1999. His projects include billboards for TV’s Ripley’s Believe It Or Not, a 6-foot tall working grandfather clock and this desk for an unnamed Seattle area executive that had included “a desk made of LEGO bricks” as a condition of his employment. Image credit: EricHarshbarger.org

The term “Rainbow Warrior” is used somewhat sarcastically among LUGs (Lego User Groups), to describe the colourful LEGO creations that children often make. When LEGO users become “serious” these early efforts are often replaced with ever more sophisticated and expensive brick collections that allow more subtle use of colour. LEGO makes 130 different colours of bricks in all, including 11 types of metallic and 6 shades of transparent. If you have an old set of basic bricks in a few primary colours left over from your childhood then the kitchen gadget holder is perfect for your first LEGO home improvement project. Start with a baseplate and build up. You can cut the baseplate to any shape and size you want. Adding custom touches like hanging hooks and separate compartments is easy too.

There are probably easier ways to patch a wall but there is no easier way to turn a spot of chipped plaster into a secret treasure. Patching old walls with LEGO actually has a name. Called “Dispatchwork”, it began in a small village in Italy where German-born artist Jan Vormann was participating in a contemporary art festival. He noticed the haphazard repairs to many crumbling old buildings were more about function than appearance and they reminded him of the colourful LEGO creations of young children. Thus began his special brand of street art, covering up the voids of crumbling civilisation with whimsical splashes of colour.

Vormann has been encouraging others to do their own dispatchwork, which means that LEGO patches have been appearing in dozens of countries around the world. To provide inspiration and tips on creating your own dispatchwork, Vormann maintains his website. An interactive map shows the location and includes photos of completed patches.

For patching public buildings and walls, Vormann recommends not to use glue. If you’re patching your own property, then a little masonry sealer will hold your patch in place and keep it watertight. You can even share some fame by snapping a picture of your completed project and emailing it to Vormann. He’ll put you on the map and add a link to your photo as well!

If you’re walking in Memphis, keep your eyes peeled for the ghost of Elvis and this elusive LEGO “dispatchwork” tucked away near a busy sidewalk. Image credit: ILoveMemphisBlog.com

The wall-mounted LEGO key holder is a super home improvement starter project for any aspiring LEGO DIY handyman. The basic design is a wall-mounted base plate that is used with snap-on key tags. Dave Hax has a super simple YouTube tutorial that gives you the basics.

There are a variety of LEGO bricks that you can thread your key ring on. There are many modified plates and blocks with handles or axle holes that will accommodate a key ring. The LEGO online store has a feature called “pick-a-brick” that lets you select specific pieces if you don’t want to use old set pieces. Your design can be as minimalist or as embellished as you like. Instead of a blank base plate, populate your key holder with mini figures or build a scene from The Hobbit.

And why stop at keys? Anything that you can glue a small LEGO plate to can be snapped to your holder. Think cell phone, toothbrush, dog leash, mini-flashlight… you get the picture.

You can also easily make this a double duty handyman project by cutting and drilling the base plate as a light switch face plate. Then you can stick your keys right where you turn the light on. Now isn’t that cool?

In 2009, popular host of BBC’s Top Gear, James May, cooked up the ultimate LEGO home improvement project: The LEGO House. With the help of 1,000 volunteers and 3.3 million bricks donated by LEGO, the house was built for a TV show he hosted called “Toy Stories”. 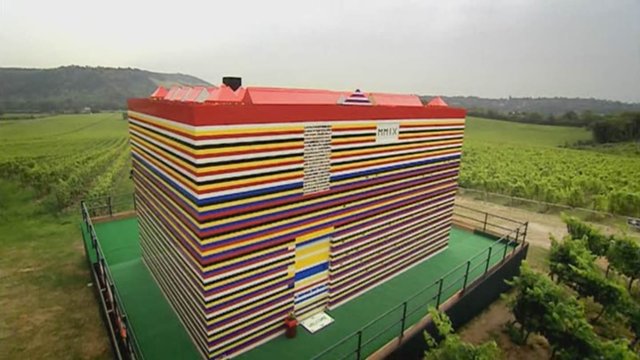 Each volunteer was tasked with building full-sized hollow bricks out of LEGO which were then assembled by contractors into the finished house. The two-story home had running water, a working sink, full size bed and even a LEGO cat named Fusker.

The house was not without its problems or controversy. First, as May found out the hard way, LEGO is not strictly waterproof. Second, a last minute decision by LEGOLAND in Windsor not to take the house after the filming, left May with a LEGO house and nowhere to put it.

Constructed in a vineyard and intended as only a temporary structure, the show’s producers failed to consult with LEGOLAND model builders about how to build the house so it could be dismantled. The house ultimately had to be demolished after only 1-week but the story had a happy ending as the bricks still found their way to LEGOLAND where they are used for popular mass participation building events.

May spent one night in the house on what he described as “the most uncomfortable bed I’ve ever slept in”. Britain’s Daily Mail newspaper ran a feature on the house documenting some of the controversy.

Even if you’re not a French designer, you should be able to pull off this tres chic LEGO kitchen island. For the basic structure, Pillard and Rosetti relied on that other iconic Scandinavian brand, IKEA. With around 20,000 bricks, this is not a weekend home handyman project. It took the two designers a week working very long hours to complete.

At around $400 for a sturdy IKEA kitchen island and another $1,000 for the basic bricks, this project will set you back about the same as a good quality island with a granite countertop. But with a cool factor that is off the charts and the standard do-it-yourself conversion rate of “anything you make yourself is 10 times better than if you bought it,” we figure it’s well worth it. Just say it’s your own take on Danish modern.

LEGO: Then and Now

LEGO has been used in many creative ways that Ole Christiansen, the founder of LEGO, could never have imagined when he began making toys at his small shop in Denmark. Whether you want to tackle something simple or stunning, LEGO is handy to have around when it comes time to spruce up the house (or build one). We certainly think Ole would be pleased. And we can’t wait to see what’s next for LEGO!

Did you know? While LEGO started producing toys in 1932, it wasn’t until the early 1960s that the right plastic was found and the interlocking brick design we know today was perfected.