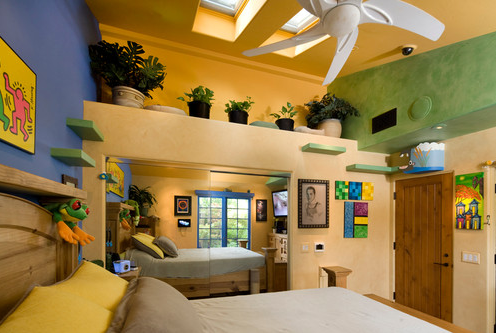 Does your cat try to takeover your world? Does she sleep on your best leather furniture, dart too close to the precious ceramic vases you hand-carried back from Turkey, or not leave enough space in your bed for you to stretch out and get comfortable?

Well, if any of this sounds familiar, maybe it’s time you built your cat some clever cat-dedicated furniture to play with instead!

You don’t need to spend $35,000 renovating your home into a kitty paradise, like this guy did. There are lots of things you can do on a much smaller home improvement budget.

Here are 6 affordable DIY cat furniture projects to stimulate the home handyman in you:

If you are not steeped in the lore or Doctor Who, a TARDIS looks like a 1960s London city police call box and is capable of traveling through time and space. (Or so they say.)

How popular is Doctor Who? The fact that we found this next project on a site called TardisBuilders.com should give you an idea.

What TARDIS builders have in common is the ability to turn any project, from a bookshelf to a wardrobe to a iPhone cover into a TARDIS.

One TARDIS builder that goes by the handle Astromark posted pictures of his 1/2-scale TARDIS cat fort including several pics of the project in progress. Inspiration for the project came from a 1/6th-scale TARDIS that Astromark built as a Christmas present for his brother. His cat Kaylee liked that one so much he decided that one big enough to have some cool cat stuff inside would be a great project. Check out the project build and cool interior cat-cessories here.

Mike and Megan Wilson of Grand Rapids, Michigan built their first Indiana Jones Cat Bridge for their desert lynx, Ickle. After Megan’s mother saw it she said they should sell their creation on Etsy.

They did. It was so successful that they moved from their apartment workshop to a shop in a rented garage, and they later quit their jobs to build cat furniture full time. Thanks Mum! 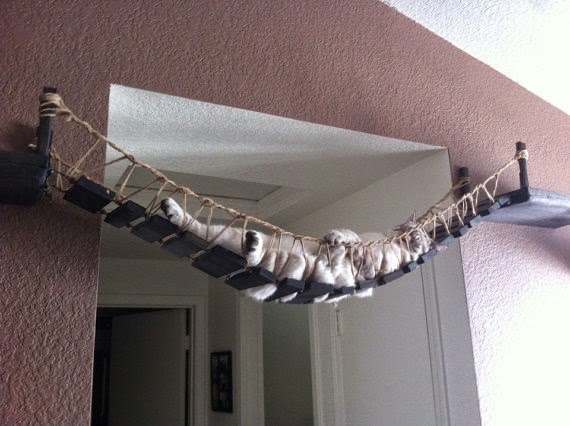 CatastrophiCreations are shipped ready to install. All you need is a stud finder, level, pencil, drill with a 7/16-inch bit and a Phillips head screwdriver. You can find the Indiana Jones Bridge along with more than 40 other cool cat contraptions at their Etsy shop or at CatastrophiCreations.

While they don’t sell plans, you can get a pretty good idea of what it would take to build it yourself by taking a close look at the images. There is also a good Instructables rope bridge bookshelf project that will give you the basics.

Although he doesn’t give himself much credit for his skills as a woodworker and an artist, Billy Appletini will take credit for his commitment to a joke. Billy’s friend Eric is a huge Star Wars fan and he also has two cats named Jax and Sophie. Billy thought it would be cool to build Eric a cat version of a Star Wars All Terrain Armoured Transport (AT-AT). He called his project the CAT-AT and decided to go all out by including a built-in lighted bar, disco ball and original art. Now that’s commitment.

After his plans for a 3-day project dragged into 30 days, it was finally time to get the 5-foot tall behemoth out of his apartment. After a small run-in with security who said no weapons were allowed on the property, the CAT-AT was delivered to a thrilled Eric, Jax and Sophie.

“Now it’s famous, so my buddy can’t throw it out!” wrote Appletini on his Reddit page, after the pictures of his project posted on Imgur and the description he posted on Reddit went viral enough to be picked up by leading tech news site CNET.

Here are the plans and steps in what Appletini described as his “descent into condo wood shop hell” in his image gallery of the CAT-AT project in progress.

Korean designer Seungji Mun has looked into the future and is inspired by what he saw. His cat tunnel sofa is just one of several pet friendly furniture pieces he has designed to meet what he thinks is a growing need. With 10 million people in Korea living with pets, many in small apartments, Mun sees creating stylish space conscious furniture that brings the lifestyles of people and animals together as a new industry.

“Animals are no longer pets” writes Mun, but rather “companions”. With help from collaborating designers Yongjeh Park and Kangkyoung Lee, Mun created a full size prototype of his concept. He also documented the design and construction of the Cat Tunnel Sofa here.

On her personal web home, The Zen of Making, Haley Pierson-Cox describes herself as a “Granny-glasses-wearing gal from Brooklyn with a crush on all things DIY”. She also has a thing for cats.

A few years ago she put her knitting needles down long enough to create a very cool cardboard cat rocket tutorial.

Cardboard has the advantage of being flexible which allows you to do things like bending tabs and it’s easy to cut. Cox makes it strong where it counts using double-box construction on the ground floor and securing all the major components with 3/8-inch machine screws and nuts.

She also carpets the first and second levels with leftover scraps. You can throw the carpet scraps in the wash a few times but you’ll want to discard them once the ship has passed its usable life. How long that is will depend on whether your kitty has claws and isn’t afraid to use them.

You can find detailed step-by-step instruction for her cat rocket here at Make Zine. 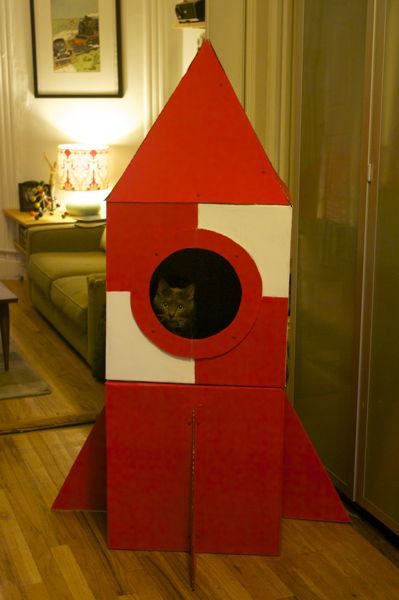 Send your cat to space, anyone? (Photo credit: Haley Pierson-Cox on MakeZine.com)

Back in 2007, retired Kodak engineer Doug McFarland from Rochester, New York had a problem. One of his three beloved Maine Coons, Mr. Spanky (A.K.A. Houdini) performed yet another disappearing act, exiting from an open second floor window. Thankfully a neighbour recognised the cat in the ‘lost cat’ posters and after being missing for a week, Mr. Spanky was reunited with his owners.

But Doug was concerned that his indoor cat might escape again, so he set himself the job of finding a suitable outdoor enclosure. He had a list of thirteen criteria (remember he was an engineer) for his enclosure. Some of the key items on the list were that it had to be escape proof, big enough for two to four large cats at a time, it had to allow safe access into and out of the house without cutting a hole in the wall and he wanted to keep the price under $500.

After doing a little shopping around he quickly determined this was going to be a do-it-yourself project. Doug chronicled his cat habitat construction with this Instructable.

These ideas are but a mere sample of the multitude of incredible cat furniture ideas online. Some great sites to visit for further inspiration include Gold Tatze (German for “gold paw”) and Hauspanther – the self-described “premier online magazine for design-conscious cat people”. (Who knew there was such a thing?)