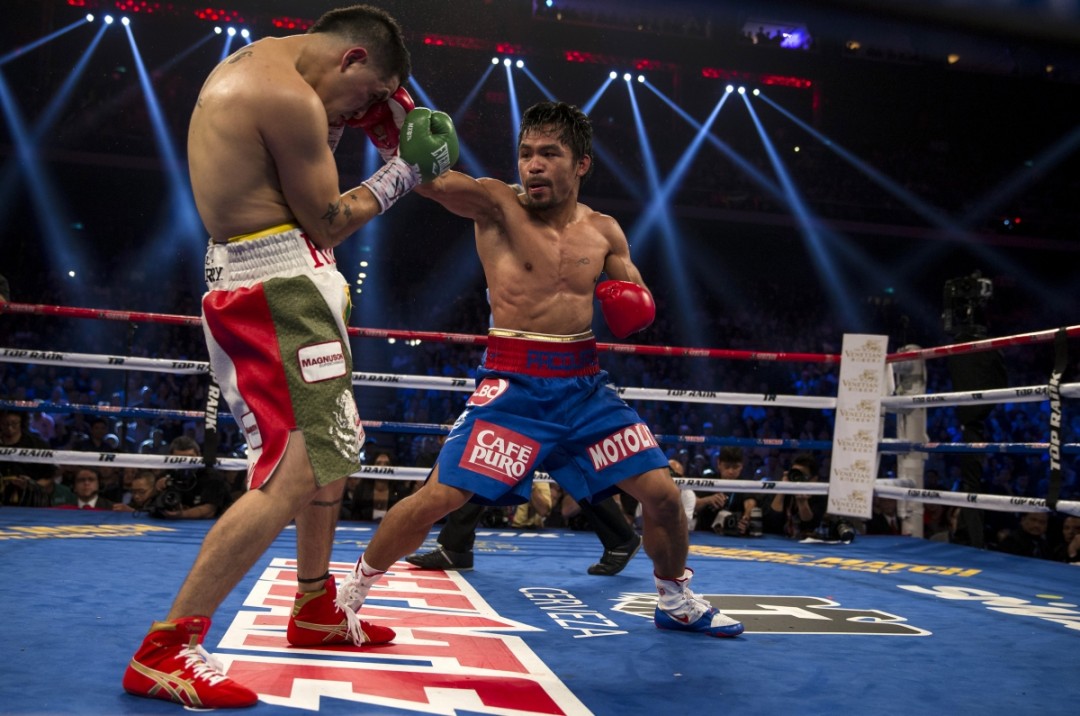 How will Manny Pacquiao fare against Floyd Mayweather Jr in their superfight on May 2? Only time will tell. But just for fun in the meantime, we thought we’d see how boxing hero Manny Pacquiao fares against another epic match – the handyman essential – painter’s tape!

One of the most valuable tools for preparing a paint job is painter’s tape. It differs from regular masking tape in that it has less tack or stickiness to allow easy removal while still protecting surfaces that are not intended to be painted. Painter’s tape comes in several different widths and tacks. Lower tack tape is designed for delicate surfaces like freshly painted walls while higher tack tape holds better on a variety of surfaces including outdoors.

Battle of the Heavyweights

Proper preparation is the key to getting professional results with any painting job. How painter’s tape is applied and how the room is prepared is much more important than the brand you choose. To really test the performance of painter’s tape in getting professional results we thought it would be fun to put it in a head-to-head contest with boxing great Manny Pacquiao.

Manny Pacquiao or “PacMan” as he is known to his legions of fans, is arguably the greatest pound-for-pound fighter in boxing history. Recently Pacquiao further diversified his talents by donning his boxing gloves to try painting.

As part of an upcoming sports science television show that Pacquiao is hosting, he recreated some of his most colourful boxing combination punches on canvas. Dubbed as PacArt, one of his fans caught “Pacquiao the painter” in action and posing with one of his signed originals.

It may seem like a stretch to pit Manny Pacquiao’s “painting” skills against a roll of painter’s tape and careful preparation, but it wouldn’t be the most unlikely opponent PacMan has faced. Besides, we think he’s up to the challenge. In the spirit of good sportsmanship and idle speculation we present the “tale of the tape”…

Lights and Other Fixtures

Painter’s Tape – For best results shut off the power and where possible remove the lights and wall fixtures. For any fixtures that cannot be disconnected, such as ceiling fans, pull them out and cover completely with a plastic bag. Once the face plates have been removed place tape over switches.

Manny Pacquiao – With 38 knockouts in his 58 professional victories, the PacMan has a habit of turning the lights out on opponents. As for fixtures, the most anticipated upcoming fixture for Pacquiao is the long talked about fight with American, Floyd Mayweather Jr.

Judge’s Decision – While Pacquiao’s record is impressive, we worry he might do permanent damage to any bags left hanging from the ceiling.

Painter’s Tape – Before painting window and door trim, sink any nails that have popped up with a nail punch. For great looking results, many pros recommend caulking all trim and door casing corners and seams before painting.

Manny Pacquiao – Pacquiao is known for keeping a large, and many say, dysfunctional entourage to handle anything and everything outside the ring. From doing his laundry to washing his car, Pacquiao employs a rag tag bunch of personal assistants numbering as high as 20 people that hang around and wait to find out what he might need next.

Judge’s Decision – While Pacquiao is likely better at nailing punches than punching nails, we bet he has someone on his team that is handy with a caulking gun.

Painter’s Tape – Before painting, use latex spackle to fill any holes or depressions in the wall. Latex spackle dries without shrinking and a light sanding will leave the wall smooth and ready to paint.

Manny Pacquiao – Inside the ring, Pacquiao is a consummate handyman. When he burst on to the international boxing scene in 2001 after winning the IBF Super Bantamweight title in Las Vegas, his reputation as a street brawler was quickly replaced by respect. His formidable skills and lightning speed give Pacquiao all the tools he needs to take on bigger and stronger opponents. Being a natural southpaw also gives him a tactical advantage over fighters with an orthodox stance. Most right-handed boxers have trouble dealing with Pacquiao’s mirror image moves.

Judge’s Decision – Pacquiao’s perpetually pivoting and unpredictable footwork allows him to quickly find holes in even the best defensive walls and get the job.

Painter’s Tape – To prevent paint bleeding under the tape, use a putty knife or small wedge of wood to press down the tape along the edge next to the surface being painted.

Manny Pacquiao – While Pacquiao isn’t squeamish, receiving 37 stitches after his rematch with Timothy Bradley, he is superstitious. It is widely known that Pacquiao believes having blood drawn too close before a match weakens him. Undefeated American Floyd Mayweather Jr has managed to stay out of the ring with Pacquiao (and maintain his spotless record) by demanding Olympic style blood tests for performance enhancing substances immediately before their proposed fight.

Judge’s Decision – While boxing is a sport riddled with superstition, Pacquiao’s fear of pre-fight bloodletting has allowed rumours of doping to seep under his skin.

Painter’s Tape – To insure paint lines stay clean along corners with moulding and contrasting walls, cut the thin skin of paint where it overlaps the tape. Use a utility knife with a sharp new blade and then peel the tape off at a 45 degree angle. Combination tape, which combines tape with an integrated strip of paper or plastic, can also be used to protect walls and moulding.

Manny Pacquiao – Pacquiao has one of the best corner-men in boxing. Trainer Freddie Roach, who maintains a stable of world champions at his Wild Card Boxing Club in Los Angeles has been Pacquiao’s primary trainer since 2001. As a second set of experienced eyes in the ring, Roach can quickly deconstruct a fighter and spot the tiniest weakness, giving Pacquiao the opportunity to blow it wide open.

Judge’s Decision – With Roach in his corner, Pacquiao has been nearly invincible.

Painter’s Tape – Food and water stains need to be properly sealed before painting otherwise they will tend to bleed through. Latex undercoat alone will not do a satisfactory job. To seal stains well, use a shellac stain-blocking primer.

Manny Pacquiao – Boxing writers have pointed out that the PacMan is highly skilled in the application of shellac. Some of his most notable work includes Chris Algieri (2014) “a shellacking of the highest order”, Erik Morales (2003) “a third round shellacking” and Sugar Shane Mosley who “took a 12-round shellacking” in 2011.

Judge’s Decision – While sealing his many victories, PacMan can apply shellac like a Dutch master.

Painter’s Tape – To protect the floor, it is recommended that you use a canvas drop cloth rather than plastic. Paint spills on canvas soak in and dry quickly while still protecting the floor. Paint drops on plastic stay wet and can be picked up on shoes and tracked through the rest of the house.

Manny Pacquiao – Dropping (opponents on) canvas has been a PacMan trademark since the very beginning of his boxing career. Pacquiao himself was dropped to the canvas in 2012 by long standing rival Juan Manuel Marquez. After being KO’d for only the third time in his career, Pacquiao stayed out of the ring for nearly a year. Starting in November, 2013 Pacquiao has come back to claim three convincing victories including Timothy Bradley who had already defeated Marquez during PacMan’s absence.

Judge’s Decision – Despite the recent victories, Marquez’s stunning KO of Pacquiao reminded the world that the PacMan was only human.

Painter’s Tape – The best way to deal with paint spills of course is to avoid them in the first place. To deal with accidental spills, be prepared before you start painting. Having a roll of paper towels handy and a damp lint-free cloth means you don’t have to run and look for something to clean up when a small spill occurs.

Manny Pacquiao – Boxing can be a messy business and Pacquiao has shown great skill in cleaning clocks. From time to time, when things have gotten messy, he’s also had opposing corners offering up their towels. Marco Barrera’s corner ended a PacMan clock cleaning in 2003 by tossing in their towel and then most famously Oscar “Golden Boy” De La Hoya did the same in 2008.

Judge’s Decision – With some of boxing’s best ready to contribute their towels, Pacquiao should have no problem keeping things tidy.

Manny Pacquiao – Ranked as the sixth highest paid athlete in sports history, Pacquiao has an estimated net worth of over US$100 million. Pay days have sometimes been hard to find as legitimate challengers have not been plentiful. It took more than five years (and a chance meeting) for Floyd Mayweather Jr to confirm he was in for this year’s superfight.

Judge’s Decision – With the upcoming Pacquiao-Mayweather match, the originally proposed $60 PPV charge is certainly going to climb. In comparison, two rolls of top quality painter’s tape will only set you back about $10-15.

The final tally puts Manny Pacquiao on top, 5-4, in a very close decision.

It may seem like a stretch for a 36 year old Filipino boxer to beat out a professional painting job but the PacMan has had success in a wide array of endeavours. He has used his fame to try his hand at being a politician, singer, actor and pro basketball player, all with considerable success. It seems there is nothing that Manny Pacquiao can’t do once he puts his mind to it. Why would painting be any different?