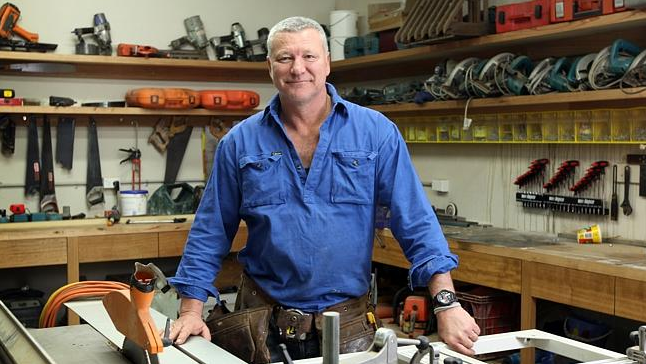 With dozens of home improvement shows covering almost every aspect of home renovation and repair – from bathroom decor and backyard garden design to budget fix-ups and dream home makeovers, what makes the difference between a how-to video with too many commercials and a hit show in a prime television time slot?

A large part of the success of top home improvement shows comes down to the presenters in front of the camera. We trust them, they make us laugh and we love to watch them.

Here are four of the most popular personalities in home improvement television and the story of how they built their successful careers.

Scotty Cam – King of the Block

From working in the dockyards of Fremantle, Perth WA, it’s been a crazy ride for Scotty Cam – Australia’s favourite television personality to now grace the stage of Melbourne’s Crown Palladium to accept a 2014 Gold Logie award.

As the host of the Nine Network’s top rated reality show The Block, Cam has become a familiar face on prime time television. Yet although he’s one of Australia’s most recognisable TV personalities, his image as a down-to-earth working man is the real deal.

Cam started at age 18 as an apprentice with his brother in the Sydney suburb of Bondi Beach NSW, where he grew up. In his early 20s, Cam decided to take an old four-wheel drive truck and travel around Australia.

For five years he was a working traveller, doing mostly carpentry but settling for anything he could get his hands on. He would work for a while and then move on.

While back in Sydney for what was supposed to be a brief visit, he met his wife Ann. He decided to stay, start a business and raise a family.

Today, whether it’s cheering on his favourite rugby league club – the Sydney Roosters, or walking his dog Rosie around the neighbourhood, Cam, enjoys many of the same things he always has during his 32 years in the carpentry game.

When first approached about doing a screen test for Backyard Blitz in 1999, Cam was sitting in a pub enjoying a beer and thought it was a joke. But he decided to go for the test and got the job – seeing it as a good addition to his carpentry business. Backyard Blitz was followed by a series of DIY and renovation shows that eventually led to his start as host of The Block in 2010.

While many, including Cam, were left reeling after The Block: Glasshouse (which Australians would remember as being a financial disaster for the contestants), the show jumped back into production almost immediately for season 10.

With The Block already confirmed through season 11 and the Gold Logie sitting on a shelf by his bed, the future looks bright for Scotty Cam!

Rob Palmer – Chairman of the Boards

Whether he’s banging a few boards together in the backyard or gliding across the floorboards on Dancing With The Stars, Rob Palmer puts his heart and soul into every project he tackles.

Often called TV’s best loved carpenter, Palmer got his start at age 9, working at his father’s company during school breaks. He started his own company in 1999 after a four year carpentry apprenticeship program and a year of traveling, snowboarding, working and playing rugby.

It was while in Wales for the 1999 Rugby World Cup that Rob met his future wife Gwen. As luck would have it, Gwen, a TV presenter in Wales, was sent to Australia to cover the 2000 Olympics. They married in 2003 and have three children.

Palmer got his own shot at presenting in 2000 when he was approached to join Channel 10’s Live This! He went on to be the resident carpenter on Better Homes and Gardens as well as House Calls to the Rescue.

Often teamed with his good mate and BHG landscape and garden specialist Jason Hodges, Palmer exudes down-home Aussie charm. He’s equally at home building a backyard bar to sharing a cold one with his mates or refinishing an heirloom cabinet to match a distressed shabby chic decor.

Known for his trademark curly hair and winning smile, Palmer’s sex appeal also landed him a call from Dancing With The Stars in 2010. After initially baulking at the opportunity due to the time it would take away from his family, wife Gwen encouraged him to give it a go. After 2½ months of hard work and dropping six kilos, Rob added Australia’s top celebrity dancer to his list of achievements. Although Palmer may seem to live a charmed life, it hasn’t always been easy. At age 7 he was diagnosed with Type 1 Diabetes. He has managed his condition well and continues to support charities related to the disease like Diabetes Australia and the Juvenile Diabetes Research Foundation.

Rob and his family also went through another a tough time while visiting Wales to introduce their new six-month old daughter to Gwen’s family, when Rob got word from his agent that his contract with BHG wasn’t being renewed.

Instead, Adam Dovile, winner of House Rules, was named to replace Palmer – which triggered an outpouring of support from his many fans.

Rob, in our minds, you are still one of Australia’s home improvement superstars and we look forward to seeing him find a new home on television in the very near future!

Twin brothers Jonathan and Drew Scott are stars of Home and Garden TV’s hit Canadian show, Property Brothers (which airs in Australia as My Dream Home on the Lifestyle Home channel).

They have been building their media, home renovation and real estate empire since they were in their teens. Growing up in Vancouver, Canada, Drew began acting at a young age and making guest appearances in television shows when he was 15. Jonathan was only 7 when he began entertaining, first as an apprentice clown and later in film and television.

Not wanting a life as struggling actors they attended university in Calgary, Canada and simultaneously decided to start a real estate business. At age 18 they bought their first house for $250 down, fixed it up and sold it for $50,000 profit.

Seeing real estate as a potential way to fund their creative interests in film and television they continued buying, fixing and selling houses. Drew became a licensed real estate agent and Jonathan, who had studied business, went back to school to study construction and design. Along with their own renovation projects they were now in business helping clients do the same thing.

In 2005, along with their older brother J.D., they created their own production company, Scott Brothers Entertainment. When they were approached about doing a show called My Dream Home they wanted to incorporate the things they had been doing with their clients. From there, the concept for the Property Brothers was born.

In the show, Drew and Jonathan try to convince couples to take a chance on a fixer-upper and then take them through the renovation process to create the home of their dreams. While the couples are involved in buying the home and planning the renovation, they do not see the renovation work in progress. Their reaction when they tour the finished home serves as the show’s joyful climax.

They travel extensively and are in huge demand for interviews and appearances – which included an offer for Drew to star as The Bachelor in the hit television show of the same name. He turned it down but at over 1.9 metres tall with dark hair and chiseled good looks, Jonathan and Drew Scott are widely regarded as two of the most eligible bachelors on TV – in any country!

Bob Vila’s career as a TV handyman started in 1979 after receiving the 1978 Heritage House award for renovating an Italianate Victorian mansion in the New England town of Newton, Massachusetts.

The show, This Old House, aired on the Public Broadcasting System in the United States. It was the very first home improvement show and Vila became the first American home improvement superstar. He left the show in 1989 and began hosting his own weekly syndicated show that lasted for 16 seasons.

During the height of his syndicated show’s popularity, Vila would also make guest appearances as himself on the sitcom, Home Improvement. Comedian Tim Allen’s character considered Bob Vila a rival to his own fictional handyman show, Tool Time. He would do everything possible to show he was a superior handyman to Vila with inevitably disastrous results. The success of Home Improvement only helped solidify Vila’s status as the top home improvement personality of the day. Along with This Old House, Bob Vila, Bob Vila’s Home Again, and Restore America with Bob Vila, the superstar has written 12 books on home renovation and hosted numerous specials on renovation and historic architecture in the United States.

He continues to be involved with historic renovation as part of the board of directors of a group leading the restoration of Ernest Hemingway’s historic house, Finca Vigia in Cuba. A native of Miami, Florida, Vila is Cuban American by birth and has reconnected with his roots on several trips to Cuba to consult on the project.

All the very best with your new show, Bob!

The Big Business of Being a Home Improvement Superstar

They are also in big demand for product endorsements (from companies like Mitre 10 and Bunnings in Australia, and Lowe’s and Home Depot in North America), because the home improvement demographic is huge and lots of companies understandably want a piece of it.

This is a good thing for fans like us. It means we can keep enjoying our favourite home improvement personalities for many years to come!