How Many Hot Dogs Could Your Startup Eat? 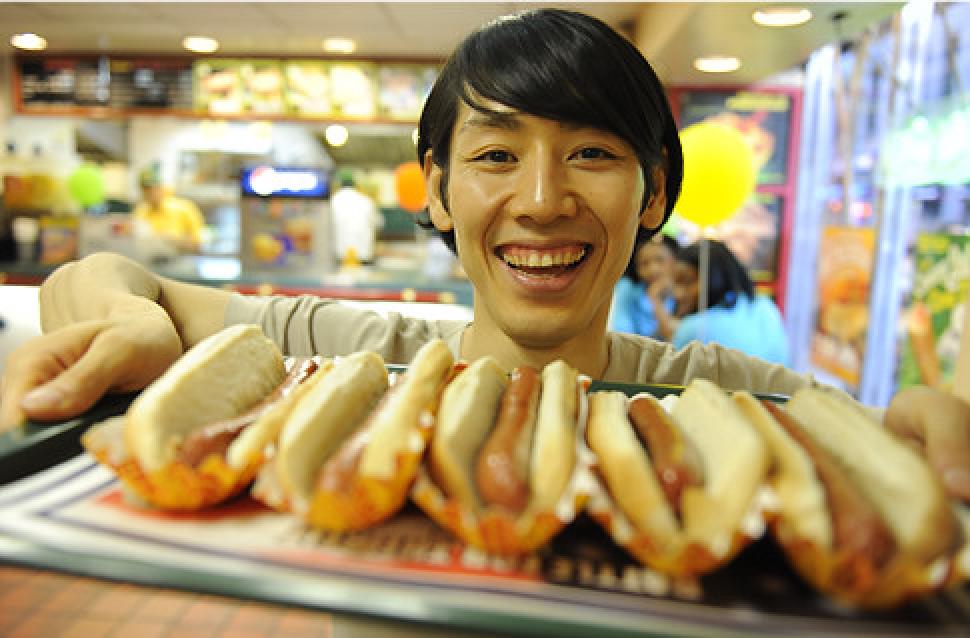 Have you read the book Think Like A Freak?  If not, do yourself a favour and grab a copy. It’s the perfect inspiration for startup founders wanting to disrupt traditional ways of thinking.

The book’s brilliant collection of stories include:

Here’s just one powerful story from the book, that hopefully your startup can relate to…

It was Autumn of 2000. A young economics student named Kobi (full name Takeru Kobayashi) was living with his girlfriend, Kumi, in Japan and struggling to pay the rent. Without telling her boyfriend, Kumi entered Kobi in a televised eating competition in the hope that he might win the $5,000 prize to pay their rent and electricity bills.

Not a big eater naturally, Kobi had to think (and eat) differently than his competitors if he had any hope of winning the $5,000 prize. So he studied earlier previous eating competitions and came up with a strategy whereby he’d only eat just enough at each stage to qualify for the next, rather than overeating in the preliminary stages to be too full to win at the end.

His strategy worked and he won the $5,000 competition.

Enjoying his first taste of success, Kobi set his sights on the Super Bowl of competitive eating: Nathan’s Famous Fourth of July International Hot Dog Eating Contest, at Coney Island in New York City. The standing record at the time was 25⅛ hot dogs in 12 minutes.

How could Kobi beat that?

Simple. Kobi decided that if he copied his competitors, he would achieve the same results as his competitors.  Sure, he had a chance of winning with a copy-cat strategy, but it certainly was not going to give him the much-needed edge that he was seeking. So, to boost his chances of success, he had to again think (and eat) differently.

What did he do?

Instead of stuffing as many hot dogs (in buns) down his mouth as fast as possible, interspersed with gulps of water to wash it all down, Kobi used one hand to remove the hot dogs from the buns, break them in half (to save chewing time) and stuff them down (he said they slid down better without the buns). Meanwhile, he used his other hand to dip the buns in his water cup (soaking up enough water to quell his thirst, which meant less time wasted on drinking), and then squeeze out most of the excess water before eating the buns – which were now mostly soggy and tasteless.

Kobi had also experimented. He had learned that warm water in his cup was better than cold water, because it relaxed his stomach muscles, and that if he spiked his water with vegetable oil, it would help the swallowing process.

So, how many hot dogs did Kobi eat at Coney Island?

Fifty (50)! He doubled the previous record. And then went on to win the event for the next 5 years as well, winning the championship from 2001-2006, and according to Wikipedia at the time of writing, Kobi now holds several records now (including eight Guinness Records) for eating hot dogs, meatballs, Twinkies, tacos, hamburgers, pizza, ice cream and pasta as well.

What has been Kobi’s secret to so many championships?

1. Thinking (and eating) differently
2. Having a strategy
3. Constantly experimenting to improve

Are you applying these 3 concepts to your startup?

Yes, it’s incredibly tempting to copy competitors (especially when they’re multi-million dollar businesses who obviously know what they’re doing). But at GreenSocks, we’re constantly pushing ourselves to experiment with different ideas, so we don’t fall into the copy-cat trap that might lead to success, but also might not. We haven’t cracked the code yet, but we’re certainly trying.

What about you and your startup… How are you trying to outsmart your competitors? And out of interest, how many hot dogs could your team eat?

Want to see Kobi in action?

Check out this video of him eating a full pizza in less than one minute (it’s more graceful to watch him eat a pizza than to watch him pile hot dogs into his mouth):

Featured image credit at the top of the page: NYDailyNews.com