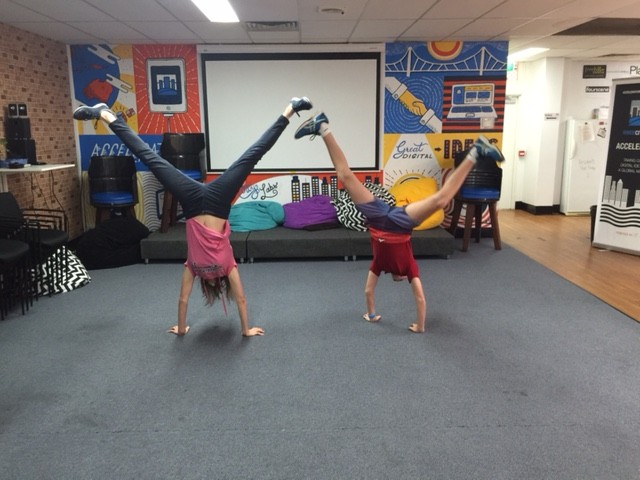 Okay, I confess, after blogging about day one of our River City Labs (muru-D) accelerator program, I have not been able to keep up on the blog front. There have just been too many fantastic people/events, and in between serving customers and trying to meet our “no fail deadlines” for the first week, it’s been difficult to make time to share the magic in a blog post. Excuses aside, here’s my best shot at recapturing some highlights from days 2 to 5 on our journey. Enjoy!

Just like a parent is not supposed to have a favourite child, I know I’m not supposed to have a favourite masterclass. But I’m going to break the rules and deem Paul Bennett’s session my favourite for the week. Aside from being a super nice guy (as were so many other guest speakers this week), Paul’s insights about what VCs (such as AirTree Ventures) look for in a startup was exactly what I needed to hear in week one of our program – so that we don’t spend our next three months (or three years) building and measuring the wrong things. 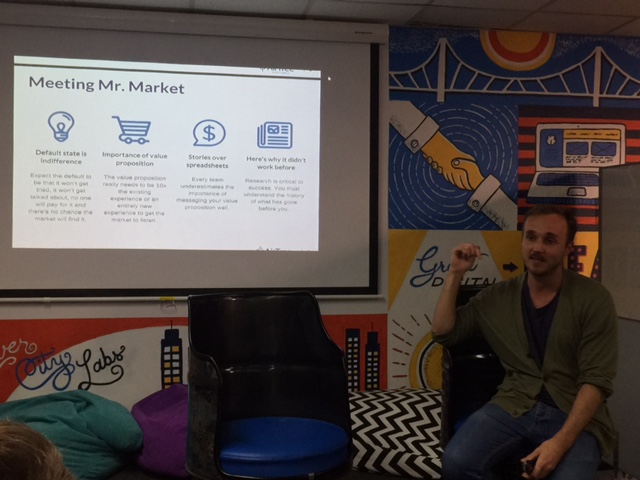 Paul’s slide deck was simple, well-articulated genius. The most important slide being the “referrals and repeats” slide which showcased what Paul described as the greatest clue to success, based on AirTree’s experience assessing 500 startups and only investing in 9 to date. And that is, “the anomaly”. It’s the anomaly that startups should focus on, Paul explained, because this is what makes a startup stand out from the pack. 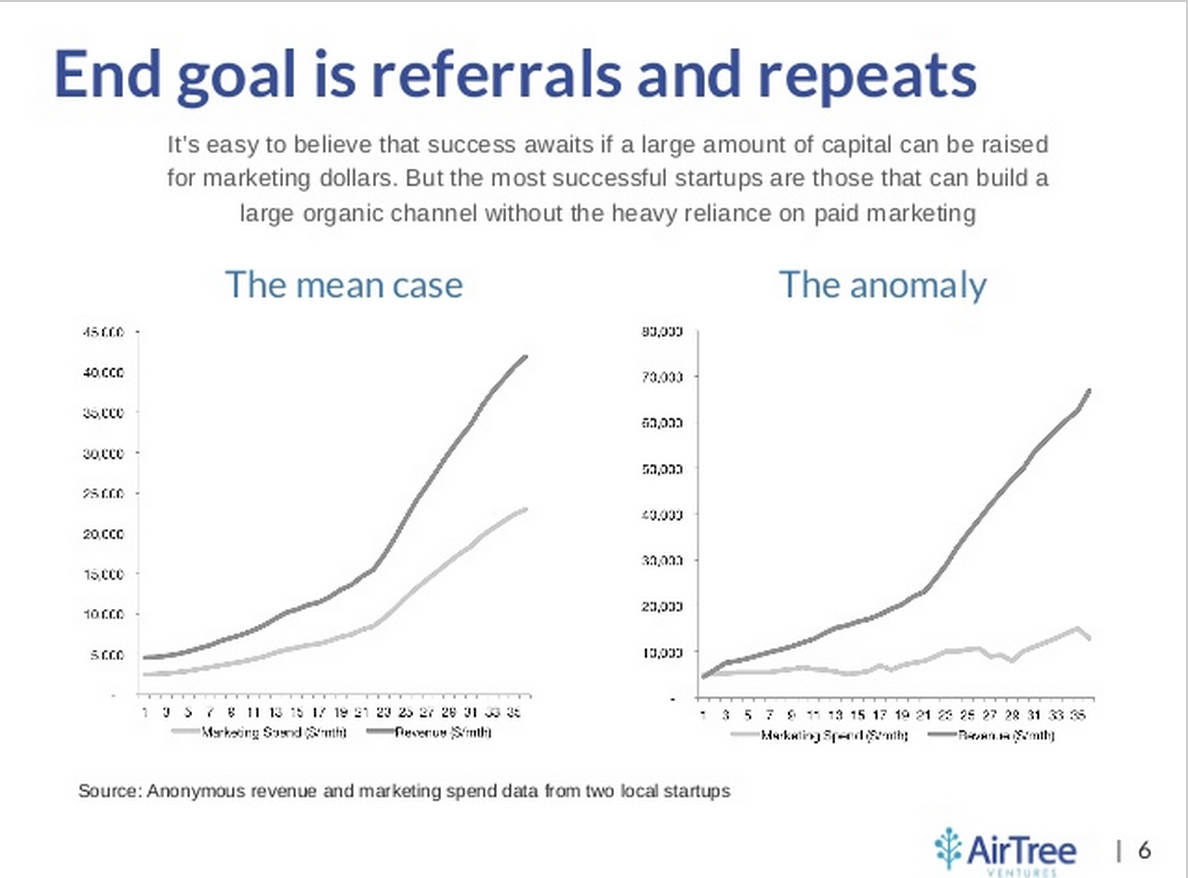 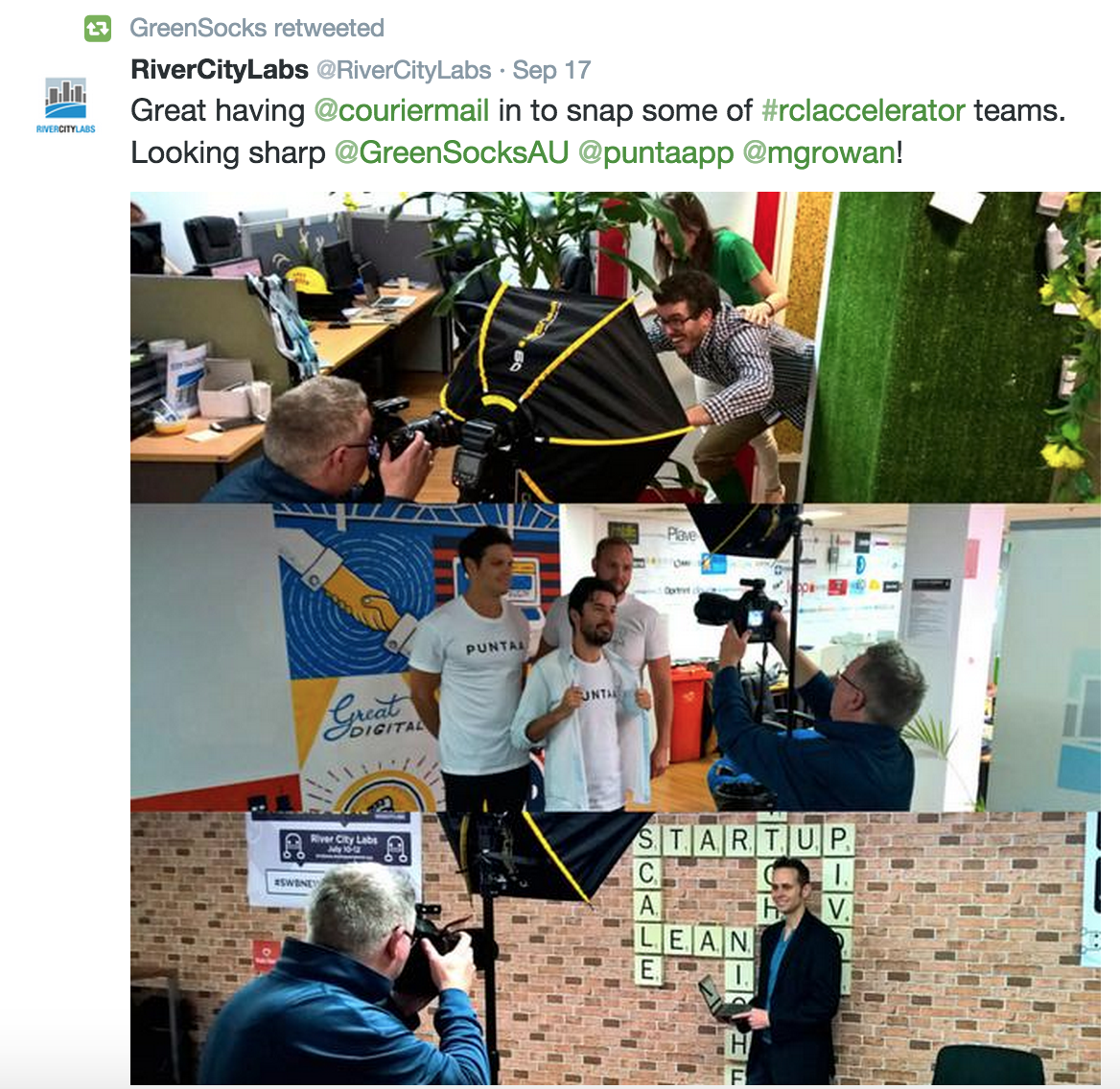 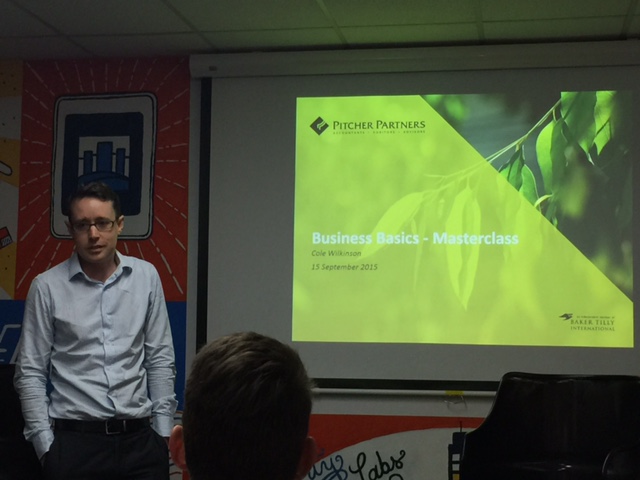 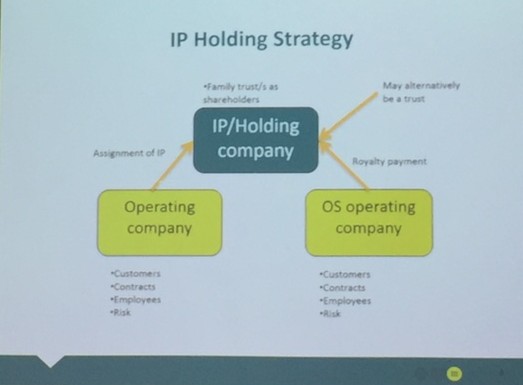 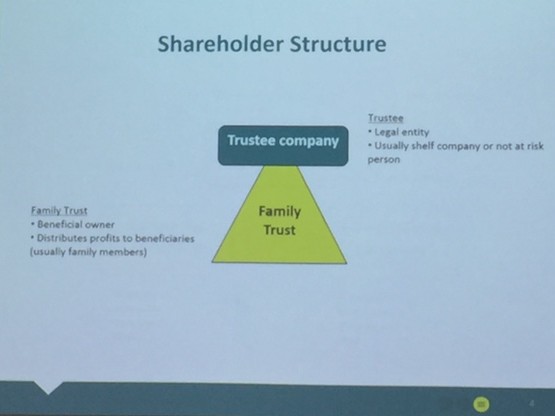 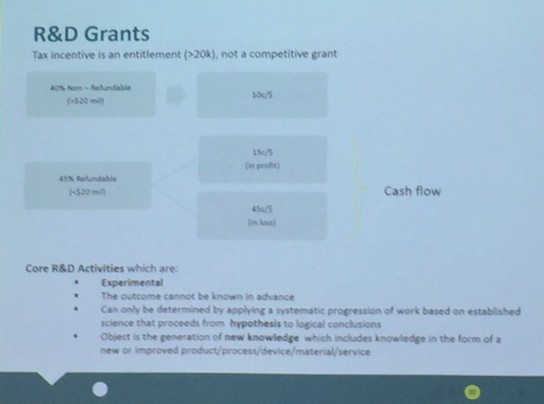 Esther Mosad (Microsoft Australia’s Startup Lead), Paul Bouwer (Azure guru) and Johann Kruse (Microsoft “Evangelist” – not the 6am TV type) flew in from Sydney and Adelaide to educate us more about Microsoft’s developer tools – and share some freebies – thanks guys! 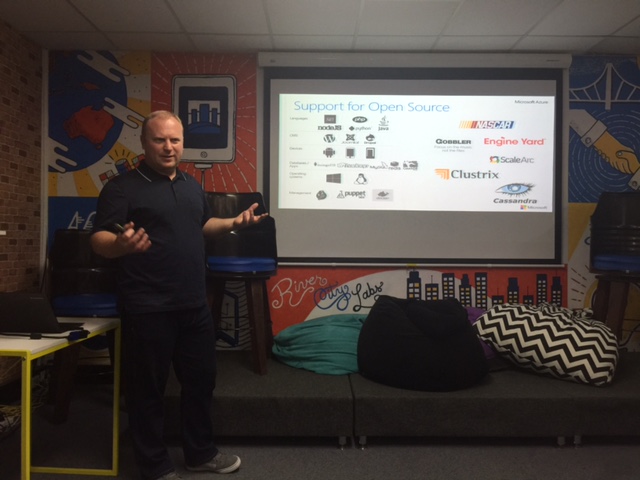 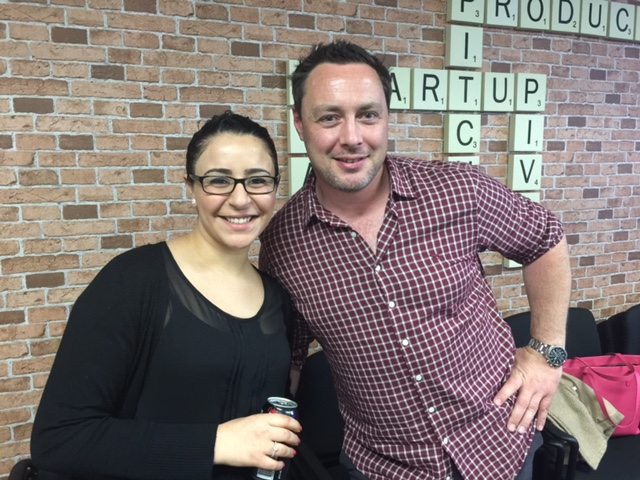 In-house PR maestro, Peta Ellis, reminded us of some PR essentials if you’re trying to hustle some publicity for your startup: 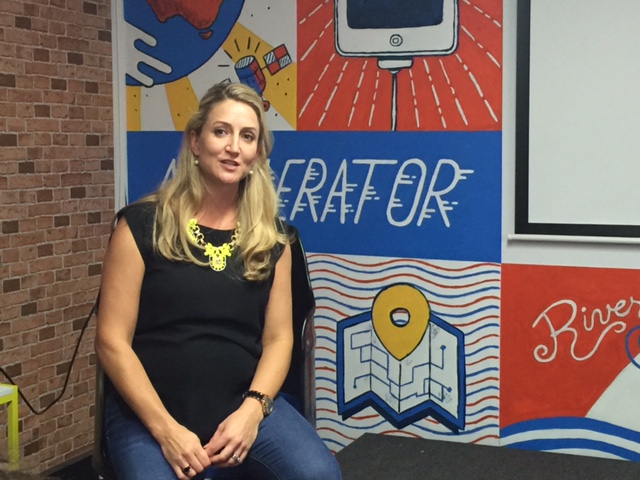 Aaron shared with us his painful lesson on, “How not to **** up your exit like I did”. In short, get a second opinion (and potentially even an ATO ruling) before you sign on the dotted line.

Another gem: “Don’t think that because you’re a CEO that you should get paid the most in your company. CEOs often get paid less than developers in Silicon Valley because it tends to be based on market rates. Awesome developers are hard to find. CEOs are more replaceable.”

On Wednesday night, each of the five RCL Accelerator teams networked and pitched at the 300+ person Silicon Beach meetup at Prohibition in Fortitude Valley, Brisbane. 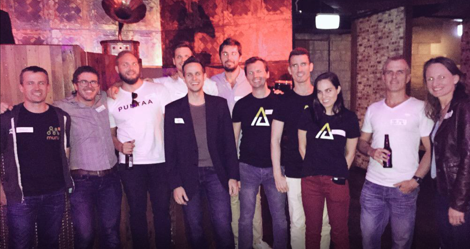 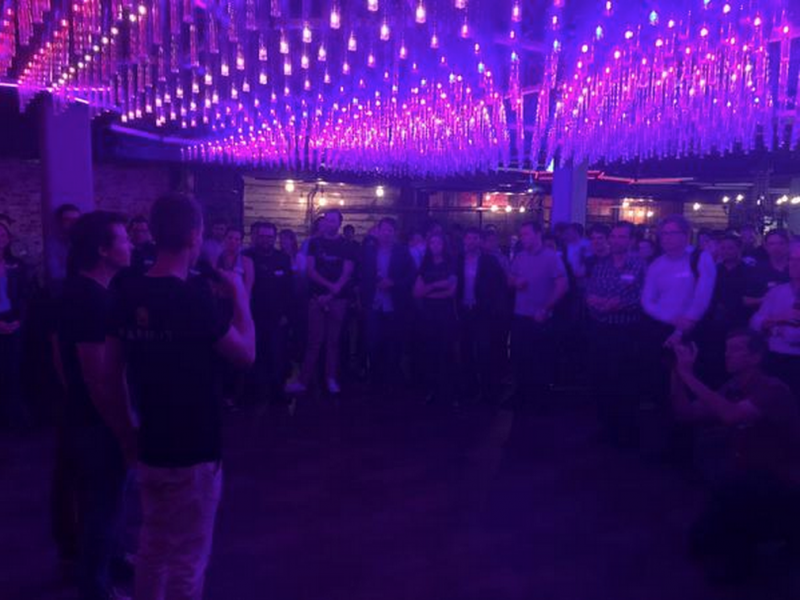 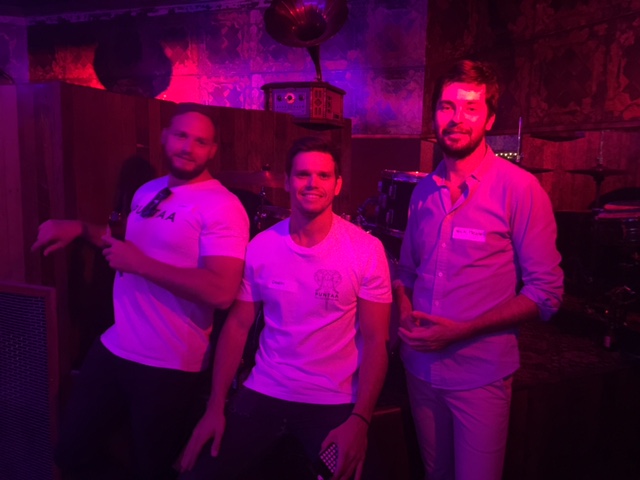 Jordan, Damon and Nick (aka The Puntaa Boys) at the Silicon Beach Brisbane event © GreenSocks

Techstars alumni John Scott (a Brisbane guy) from Cartesian Co, dropped in unexpectedly. He and his two cofounders recently returned from graduating the prestigious Techstars accelerator program in New York City (overlooking Times Square!). His fresh insights were highly appreciated. And it’s good to know that even when you stuff up your early investor pitches (aka Cartesian Co), with some accelerator training and honest ongoing critiques, there is still hope! 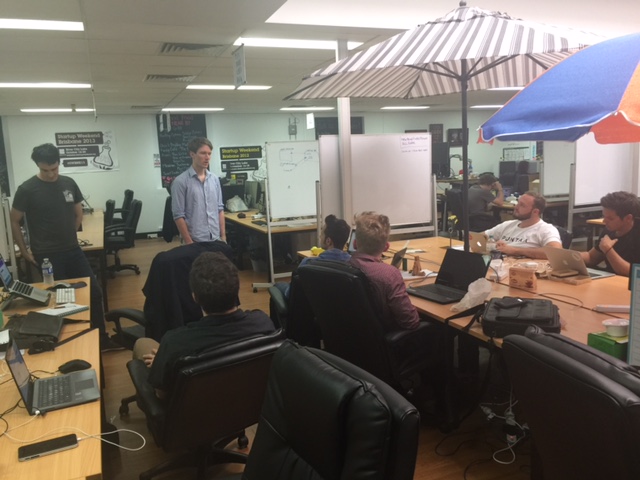 Good to see you haven’t lost your sense of Brisbane style, John! 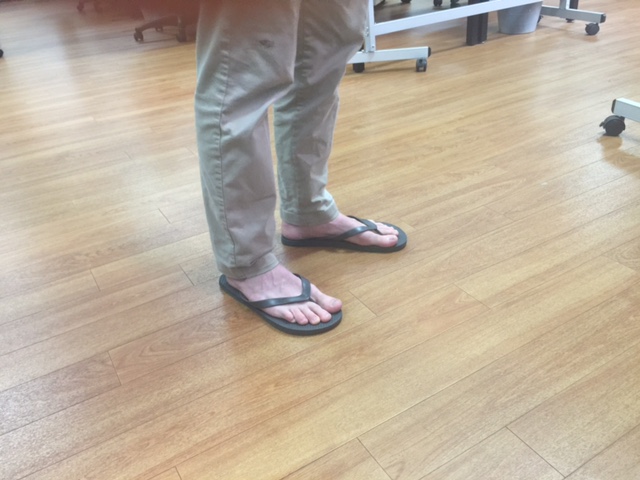 Every Friday during our 14-week program, River City Labs is opening its doors to investors, advisors, educators, corporates and startup lovers to come and see what our teams have been up to.

Week one’s event featured each of our Brisbane teams pitching, then thanks to the link-up, we watched the Singapore teams (who are also in week one of their muru-D program) have a go at a 60 second pitch. 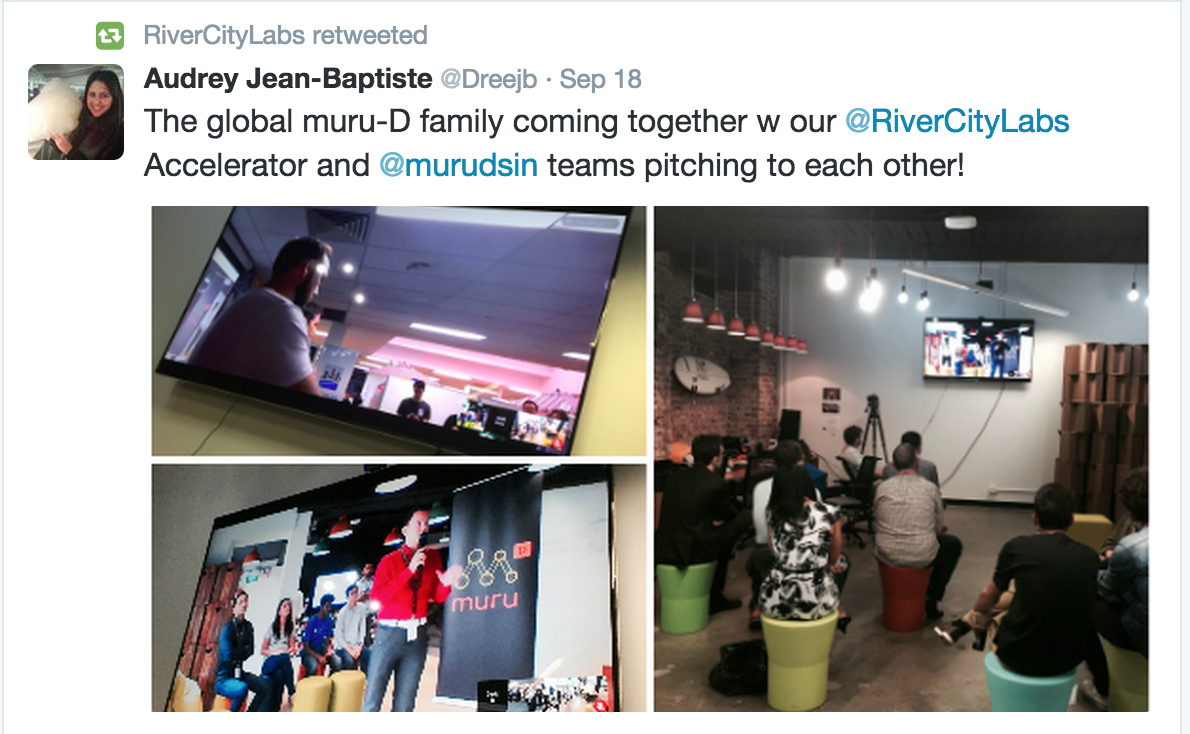 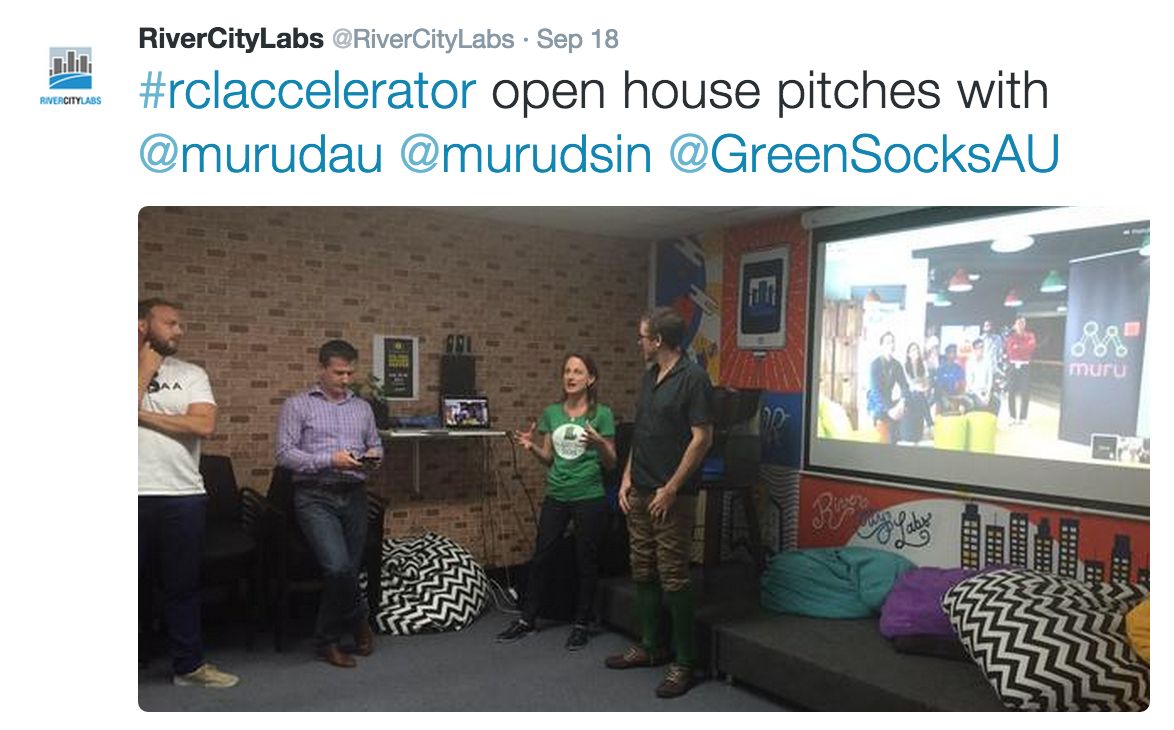 Mentors in the House

Yes! It’s the least he could do to help our ousted former Prime Minister. Click here to play. Press your space bar to jump. 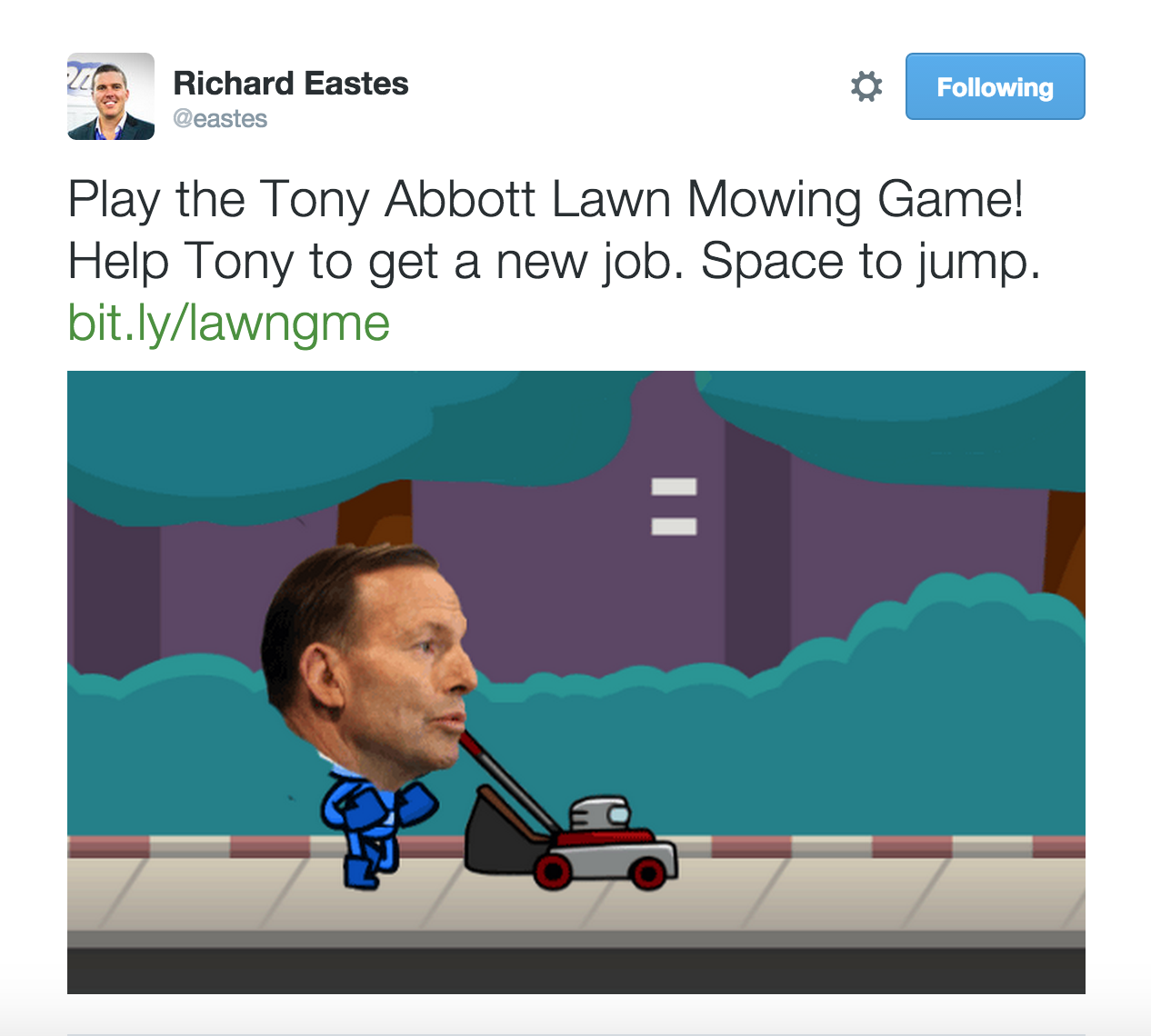 Who showed up on day 1 with a ripped shirt?

Ryan: “Hey Andrea, did you get roughed up in the Valley on the way to the office?”

Andrea: “OMG! My shirt has a rip down the whole right arm?!!”

Who danced on stage with the Strictly Ballroom cast?

That would be Matthew (Process PA) and his beautiful wife Allana. 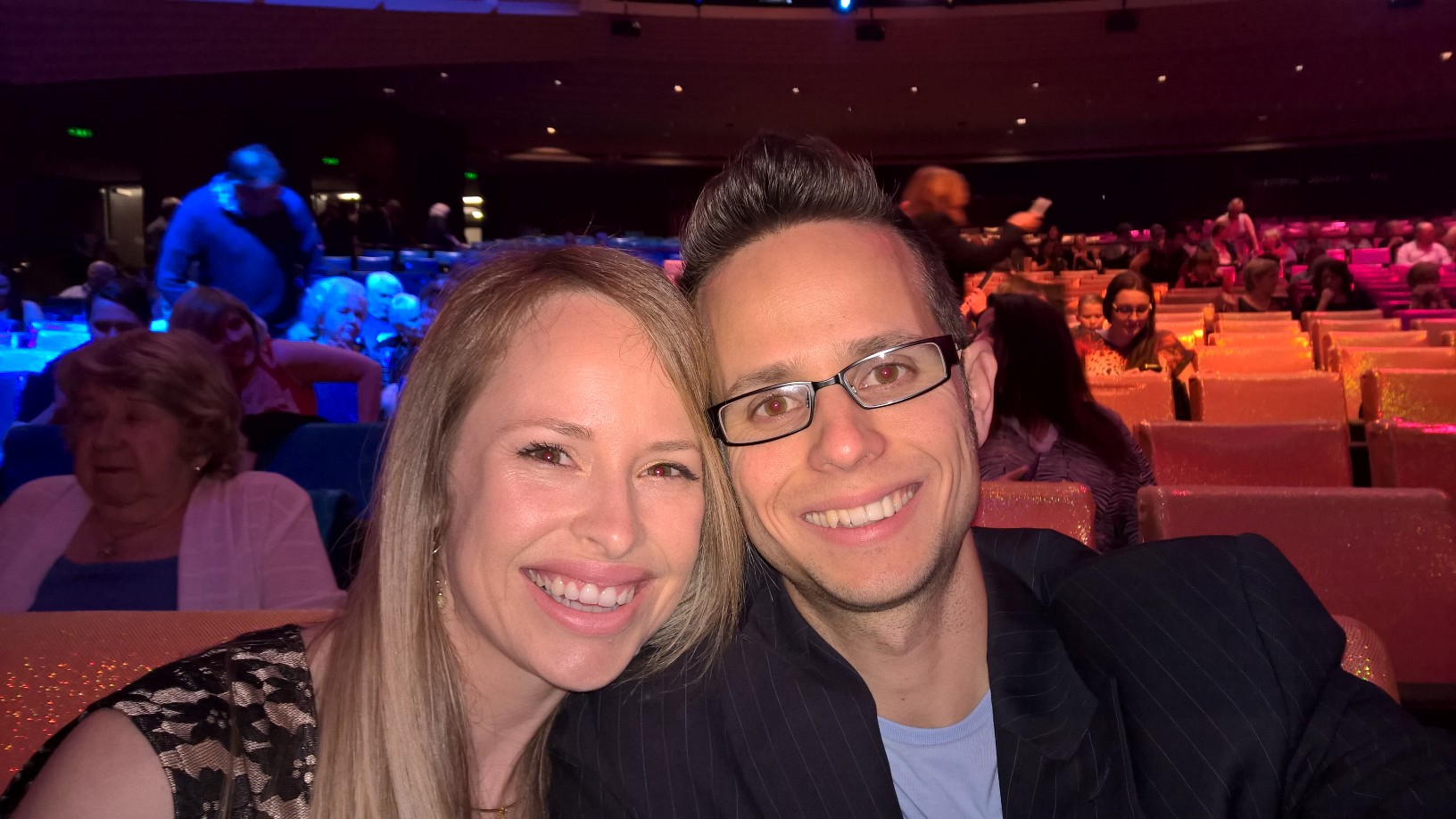 Who was left stranded at the Murarrie train station?

That would be the same Matthew smiling in the photo above.  Although he wasn’t smiling the night he was stranded at the train station.

Who lost their bed?

Richard: “Sorry Andrea, the guest room is taken tonight. Can you sleep on the couch?”

Andrea: “Isn’t this how Airbnb started?”

Which Accelerator founder got married this week?

None. But Marky-Mark-Wahlberg* from Outbound did go to a wedding in Cairns. His biz partner Ryan Gosling* held the fort in his absence.

*Who else uses celebrity names to remember people? 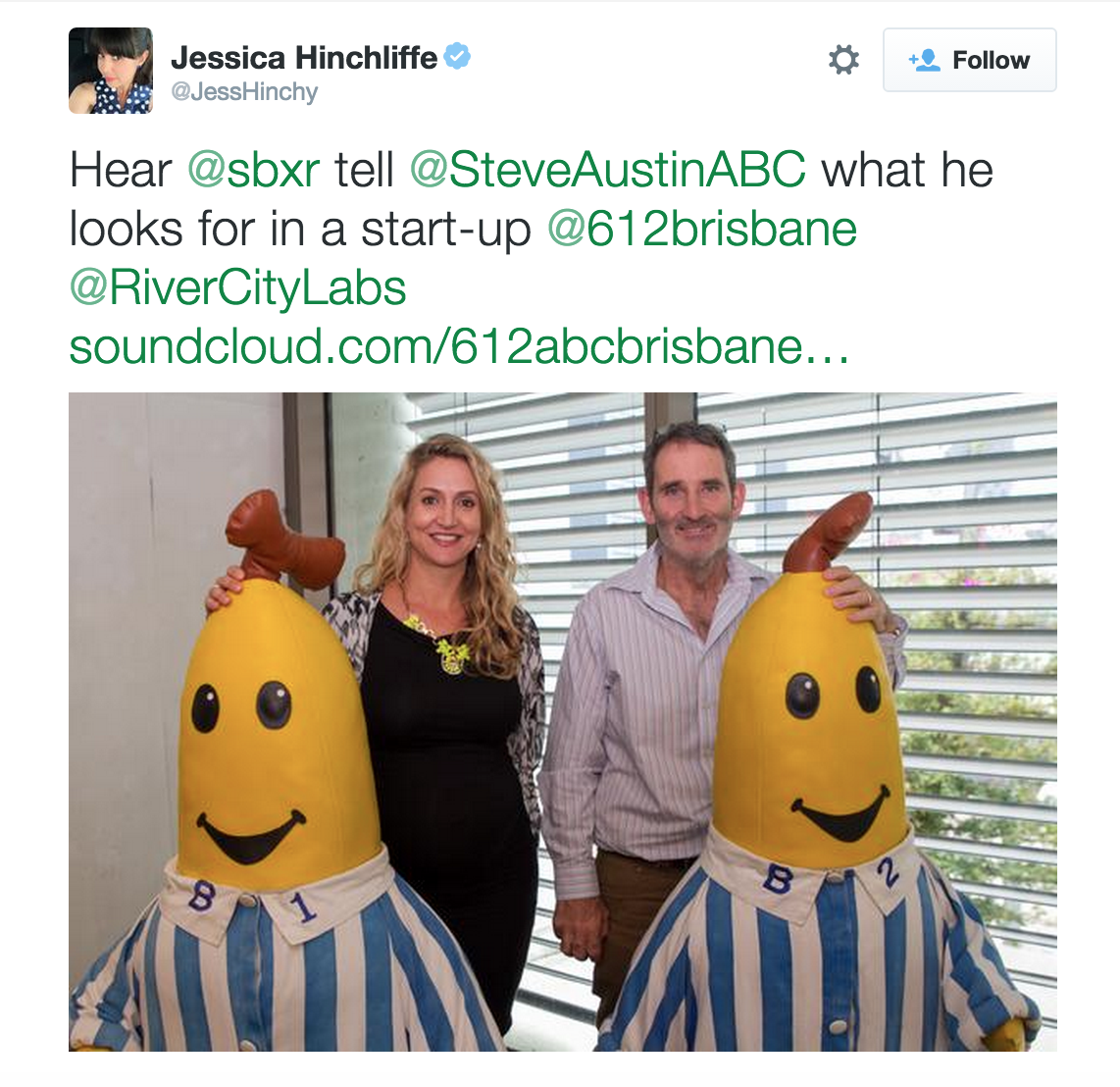 Peta Ellis and Steve Baxter with B1 and B2 at ABC Radio Brisbane (Image credit: @JessHinchy)

Who got locked in Richard’s stairwell?

Lesson learned: Unless you have a key, take the slow elevator rather than the fast stairs.

Why did Richard get down on his knees?

For the love of beer and jerky at RCL’s Open House. 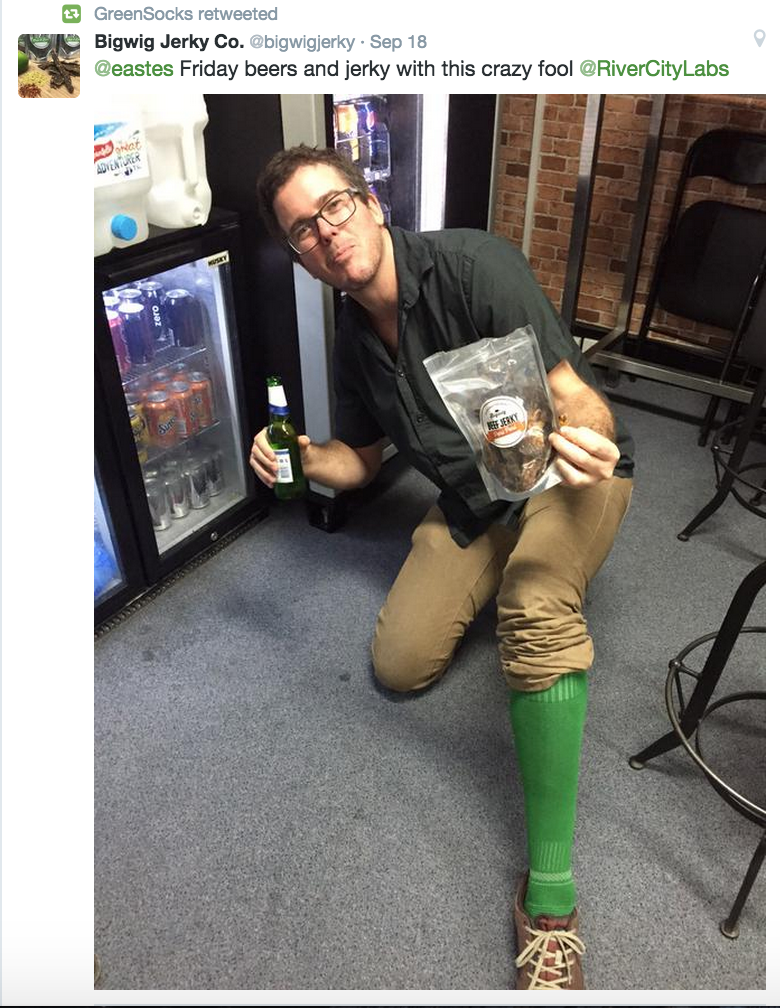 Who has the most glitzy bathroom in town?

Probably Prohibition (the venue for Silicon Beach Brisbane’s event). Here’s an insider’s shot of the female bathroom and its chandelier. 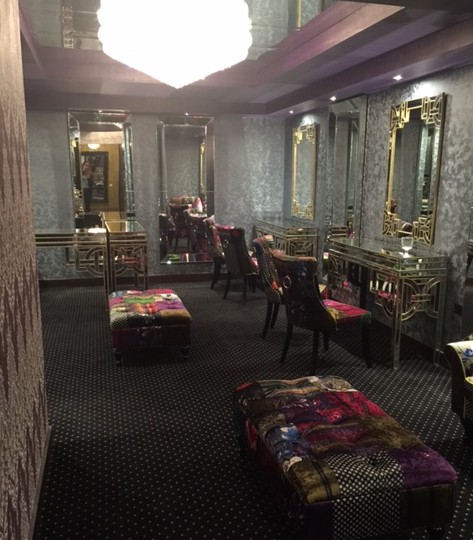 Who went to the opening night of a co-working competitor?

In our defence, it seemed rude to turn down our friend’s invitation to Little Tokyo 2’s opening night. And for the record, we were just ‘sharing the love’ and we only stayed for 30 minutes! 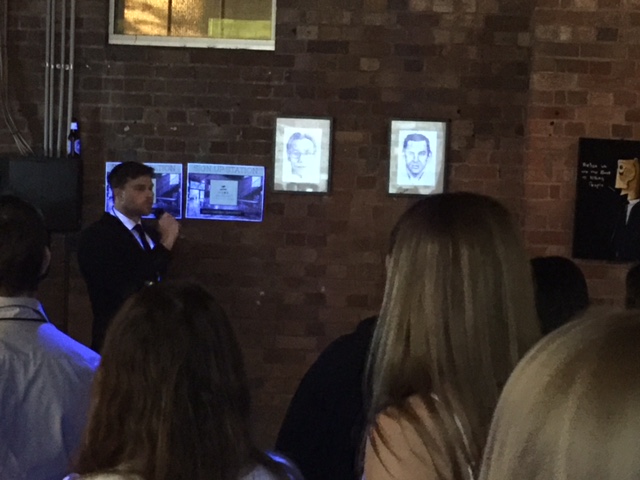 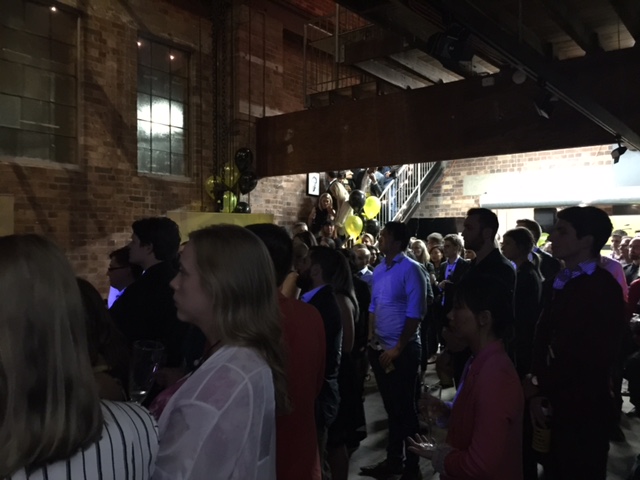 Who was doing handstands in the Labs?

Well, I had to do something when I ditched my gym card for my River City Labs access card.

What’s in store for week 2?

In addition to other awesome guest speakers, the legendary Matt Barrie is coming in. As CEO of the successful, IPO-listed Freelancer.com, Matt is a true “it-guy” in the Australian startup scene and has plenty to share.

Tune into the GreenSocks bat channel so you don’t miss next week’s wrap up.

Have an awesome week, Everyone!