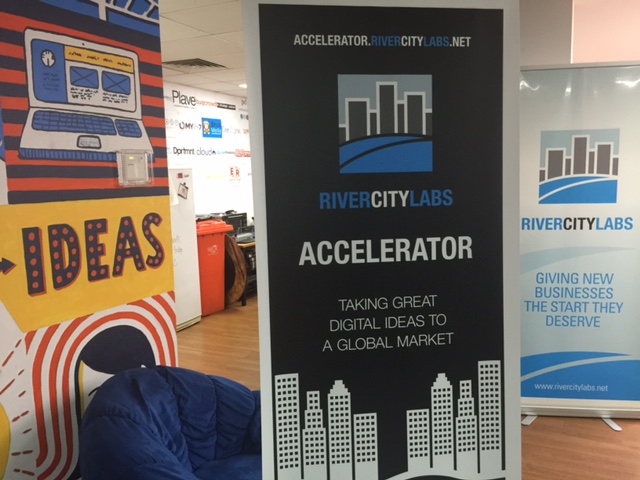 Did Matt Barrie (one of the current kings of the Australian startup scene) come to visit? Did Andrea really meet The Greek God of Gardening? Is there really a seed fund that invests pre-revenue, pre-traction and pre-prototype? What did the Puntaa boys get up to?

Week 2 in our River City Labs Accelerator and just like in our epic week 1 blog post, our lawnmowing startup has lots to share again. Here goes… 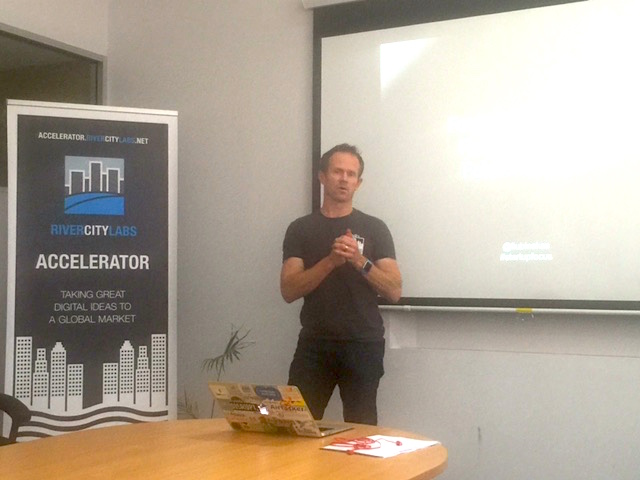 Mick’s presentation was about focus started his talk with the following slide: 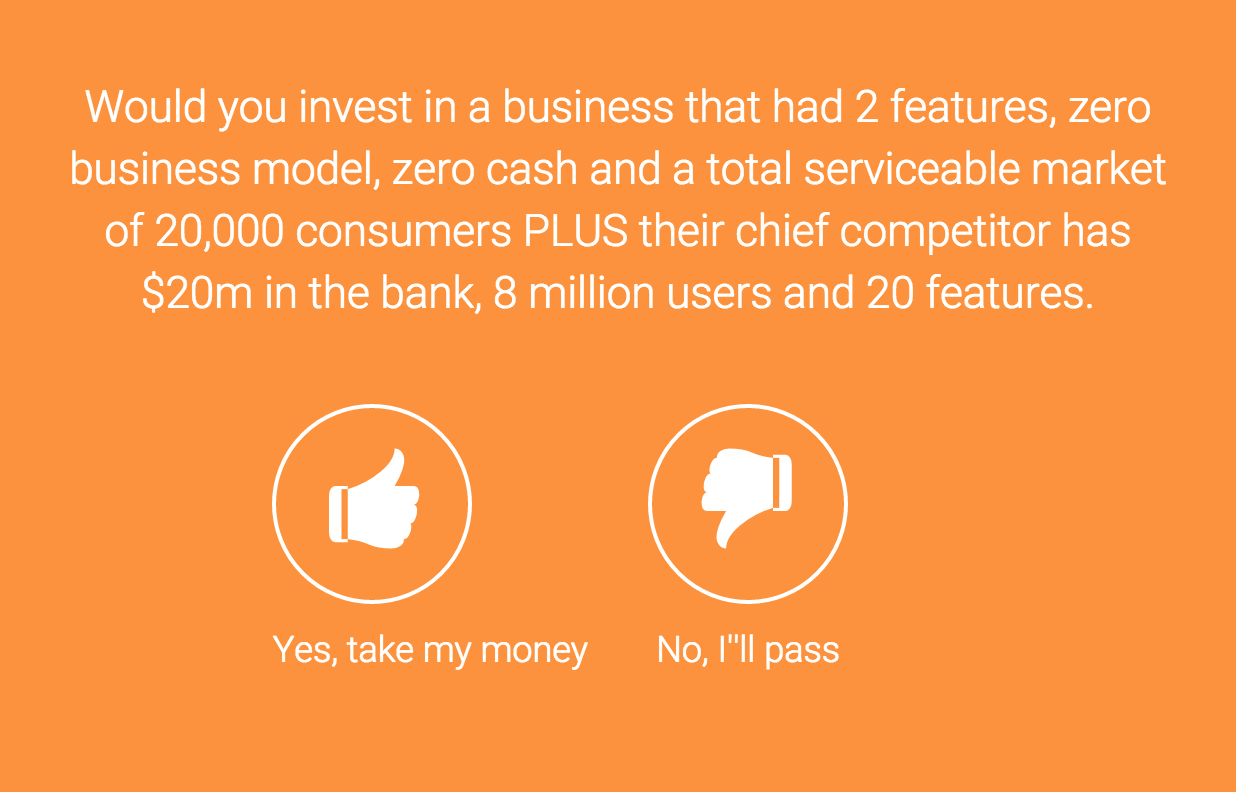 The company was Facebook. It only serviced 10,000 Harvard students and it was up against the well-funded (and now virtually defunct) Friendster. The odds were stacked against it. But thanks to its initial extreme focus, it has become a $250 billion runaway unicorn company.

Similarly, Uber started in just one city. They focussed on one, simple offering and did not try to be all things to all people. Today, the company is valued at $50 billion.

We thought lawn mowing was niche enough in the home services industry, but Mick was adamant that we need to narrow even further. And he challenged all of the other teams to think the same. He wanted us all to focus – with a discipline like never before. 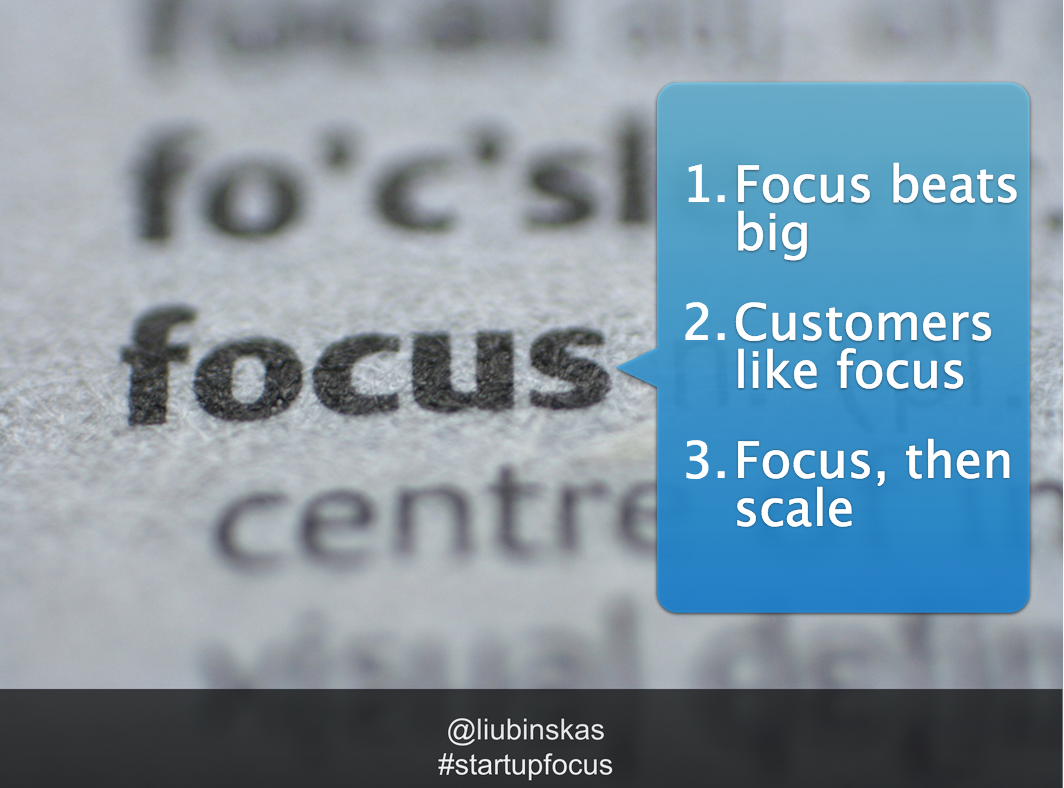 To see more of Mick’s slides, click here. In the meantime… 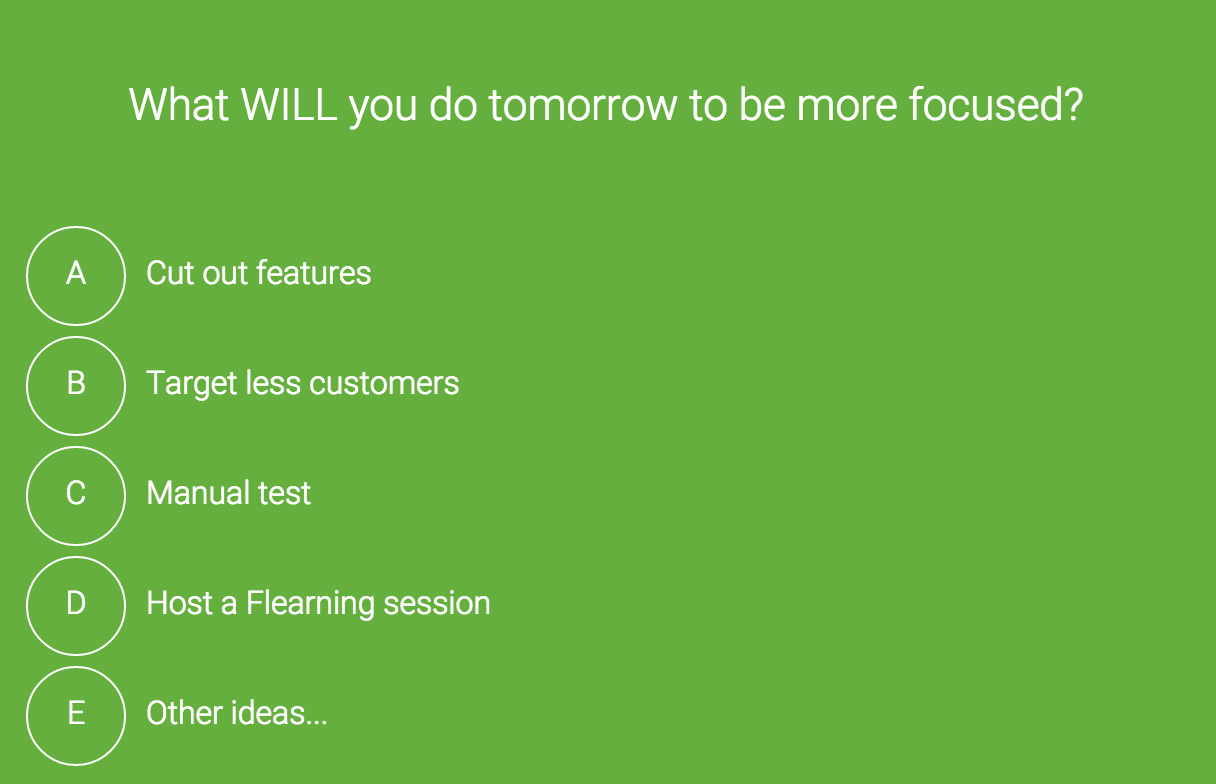 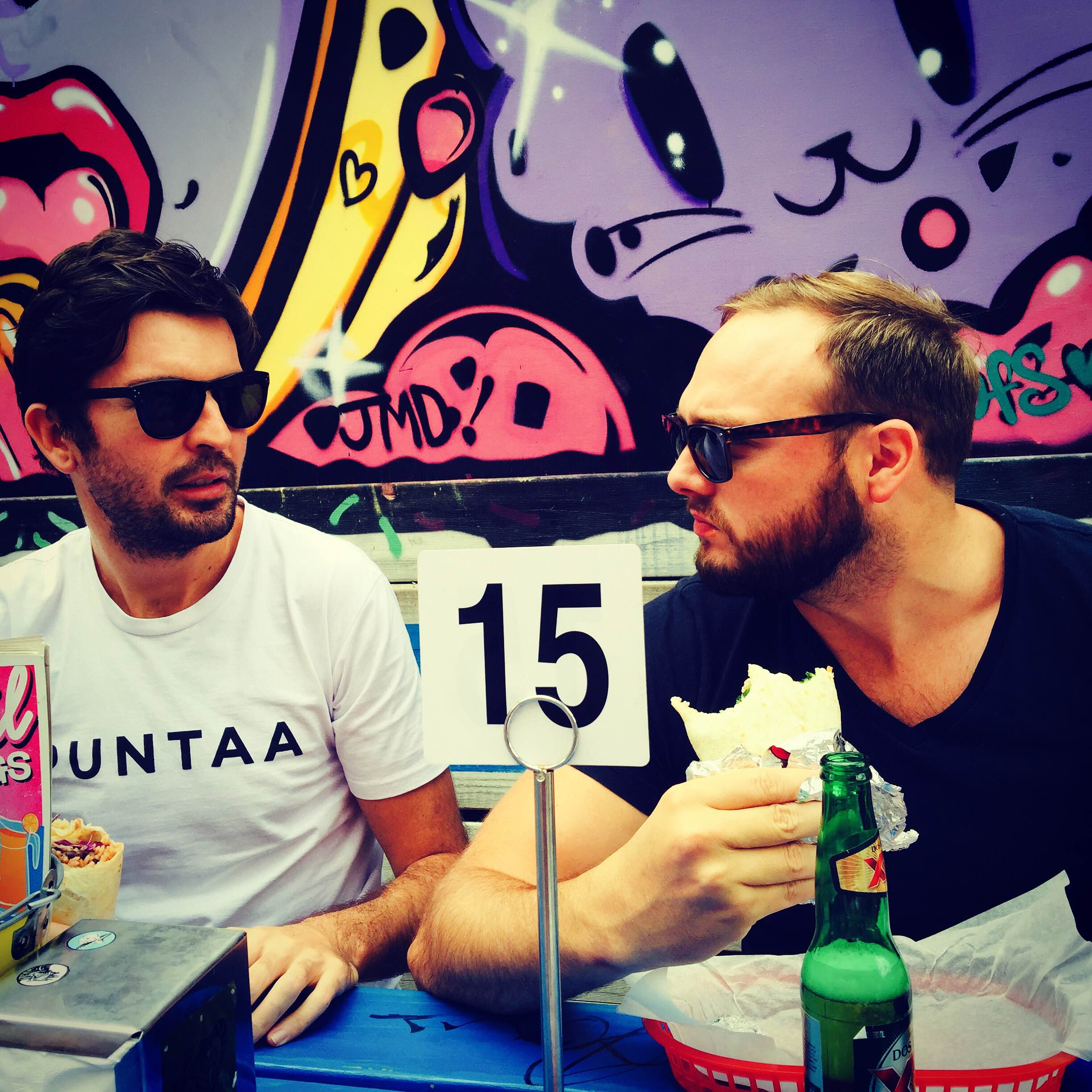 On Tuesday night, local Brisbane mentors came to generously offer their time and expertise to the five startup teams. In a night akin to a mentor dating night, teams and mentors mingled, hoping to find their perfect matches. Huge thanks go out to all of the mentors who volunteered to help the five teams! 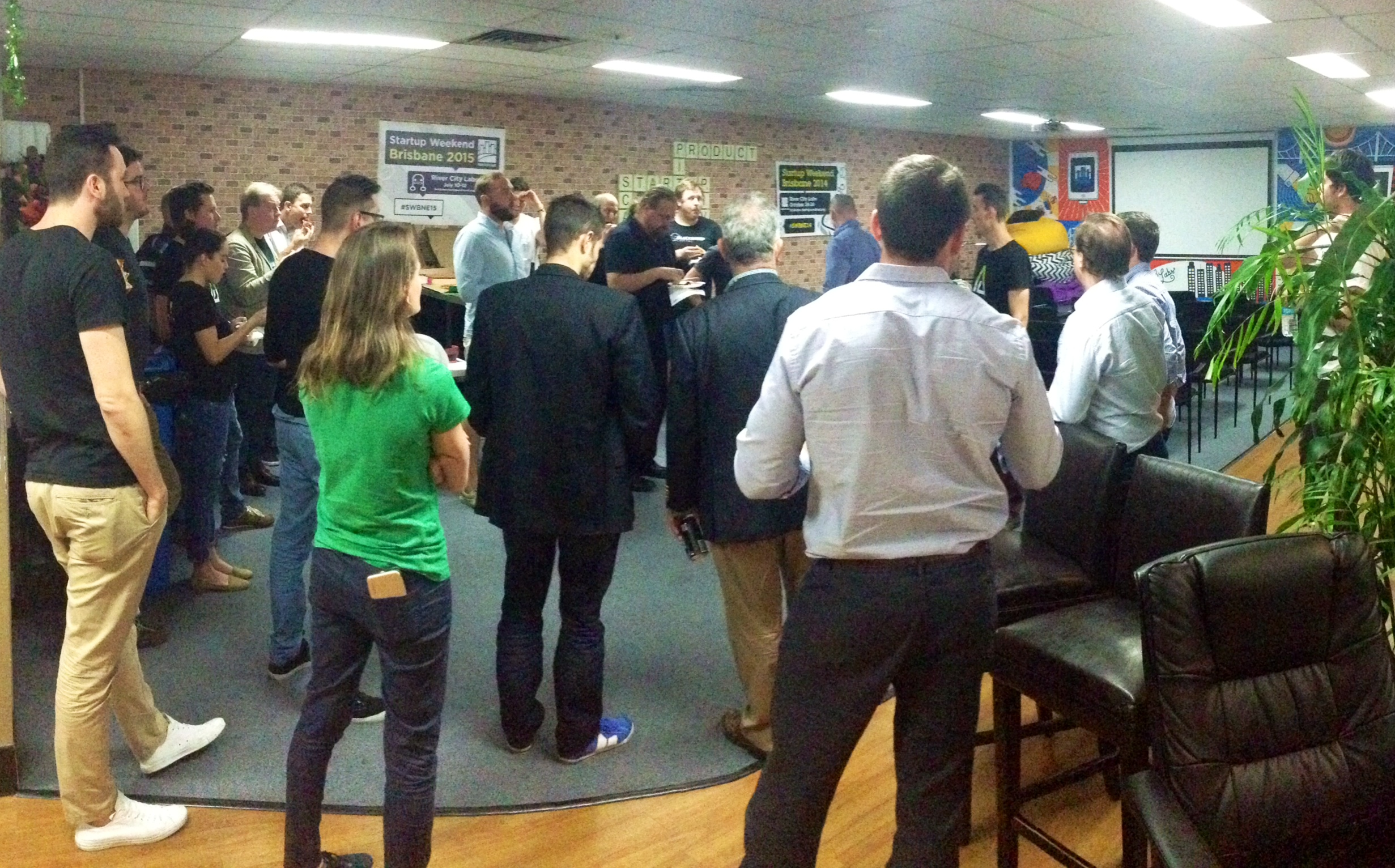 Mentor Night at River City Labs (Thanks for the photo, Emily!)

Heather Smith came in to train the teams on the accounting software platform, Xero. 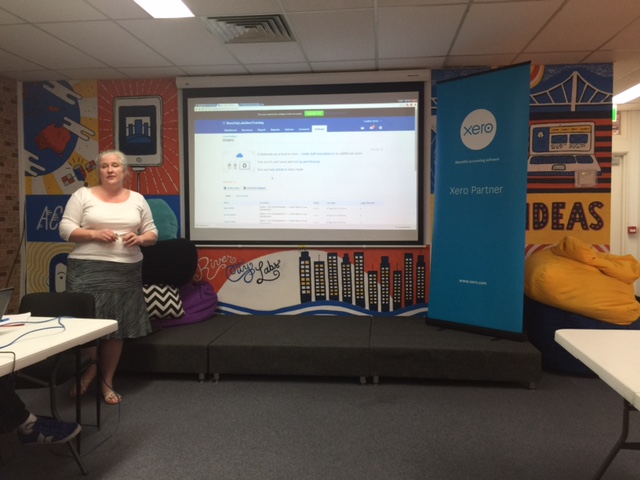 Brett Geoghegan came in to provide some one-on-one mentoring about User Experience Design (UX) to Process-PA and ParkFit. 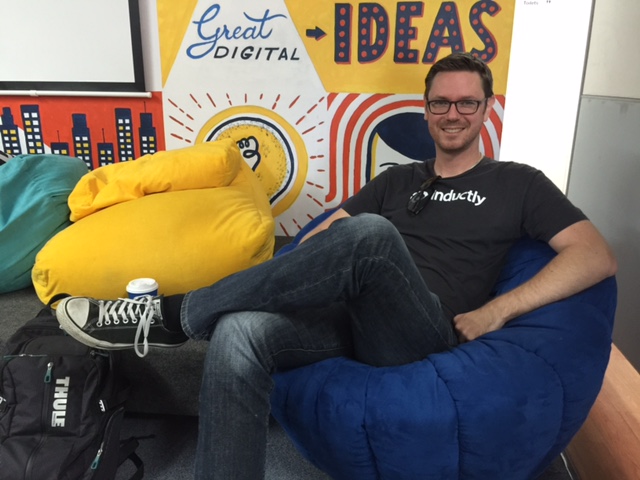 FanTees shared their truly inspiring story: 70,000 t-shirts sold via Facebook advertising and an e-commerce website. Incredible. Congratulations FanTees. And thanks for the free Accelerator team t-shirts! 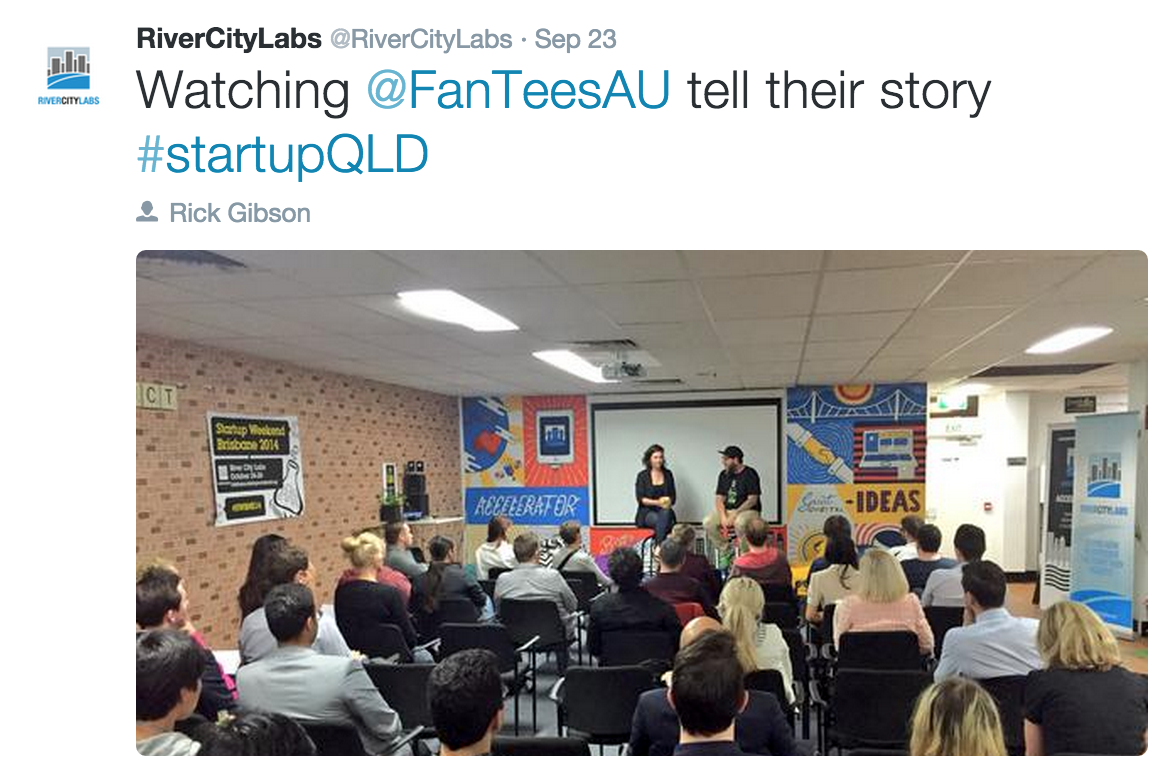 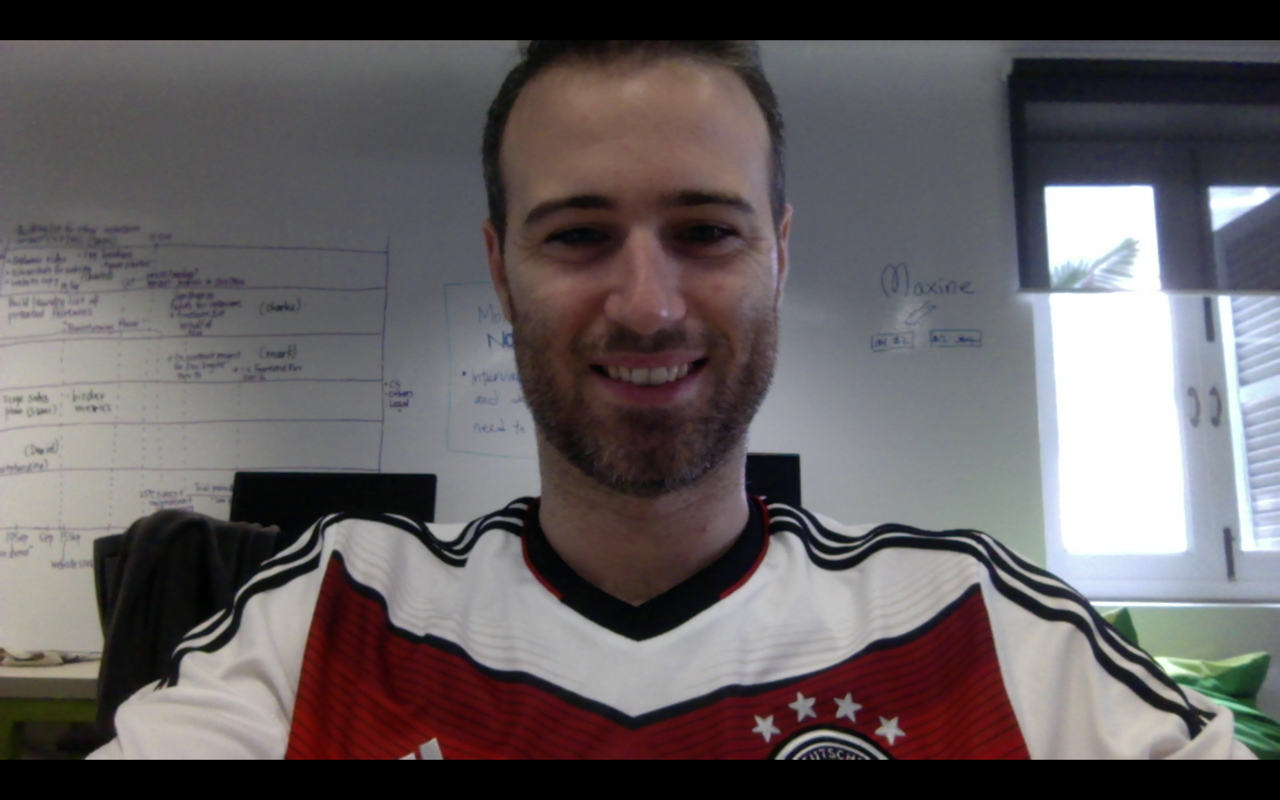 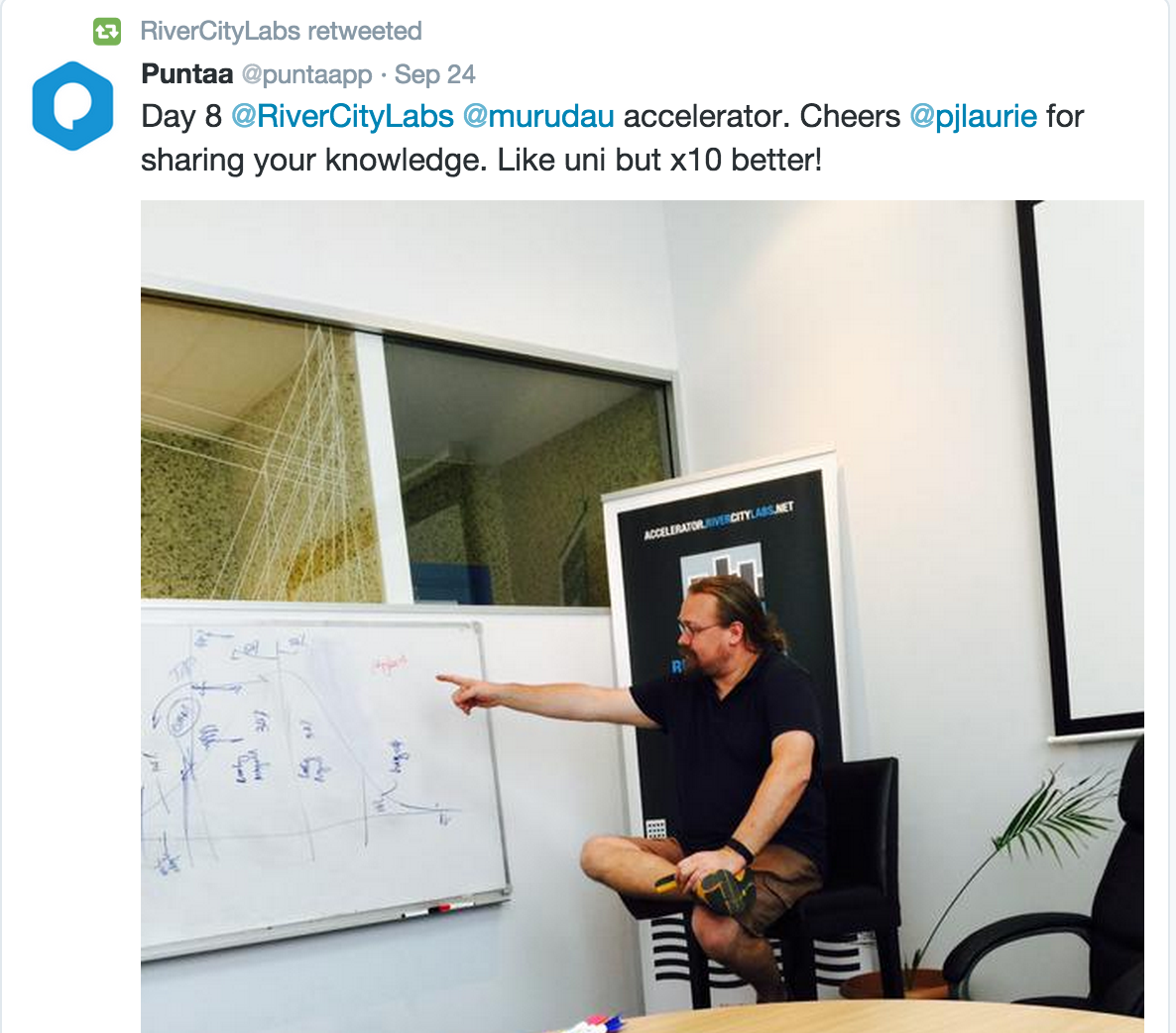 About the Sydney Seed Fund: 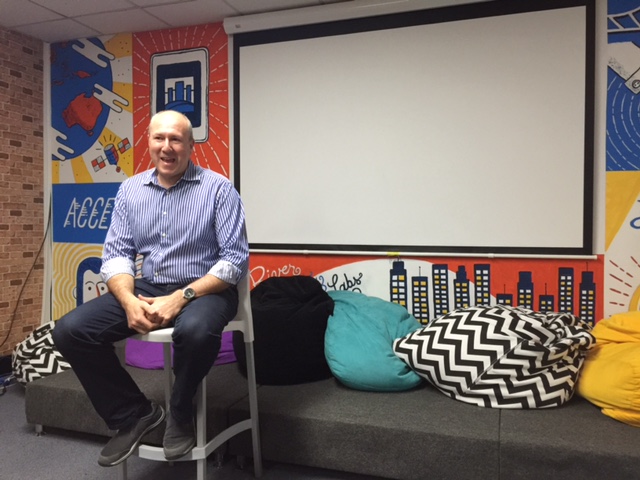 Another fun night of networking with other River City Labs residents, invited guests and anyone interested in our 14-week accelerator program. 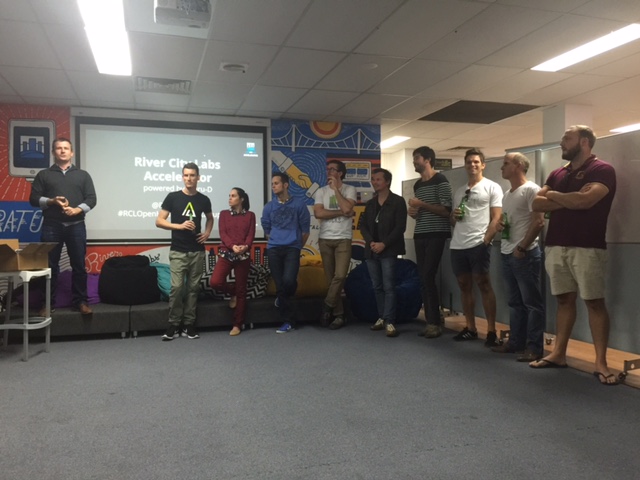 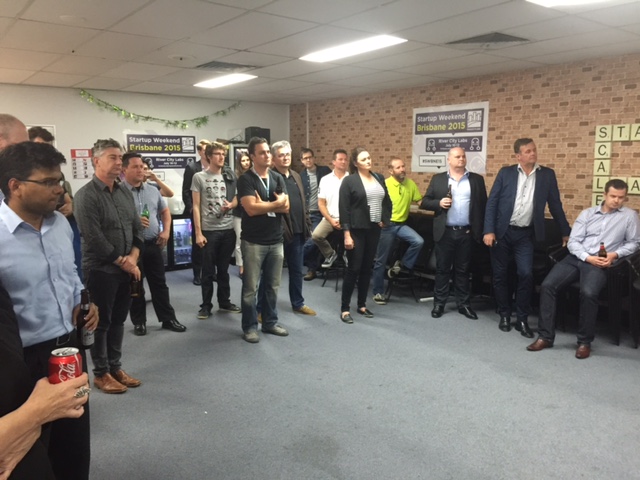 Costa: “Hey Andrea! Aren’t you with GreenSocks – that awesome lawn mowing startup? The one with the great Grass & Garden blog? OMG, let me grab you for a photo. I’m so excited to meet you!!”

Andrea: “Hi Costa, I can see you’ve just queued up for 20 mins at the Caloundra markets to get yourself a hot Turkish Gozleme. Would it be okay if you let it go cold so I can get a photo of you for our garden blog?”

Costa: “Aaahhh, sure. But you have to get in the photo with me?”

Huge thanks to the Greek God of Gardening, Costa Georgiadis, of ABC radio’s Gardening Australia for genuinely letting his gozleme go cold to humour my request for a photo for GreenSocks. Legend! 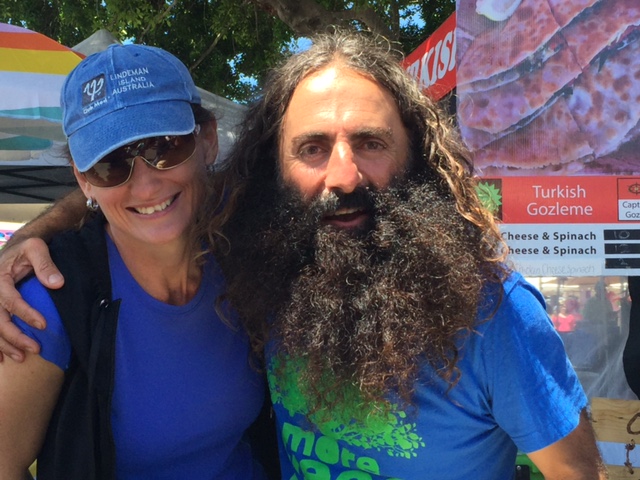 The ParkFit guys asked for some help in uploading some new rigs (ie. photos of outdoor exercise equipment) into their new app. We uploaded ours. Can you help the team and upload more? 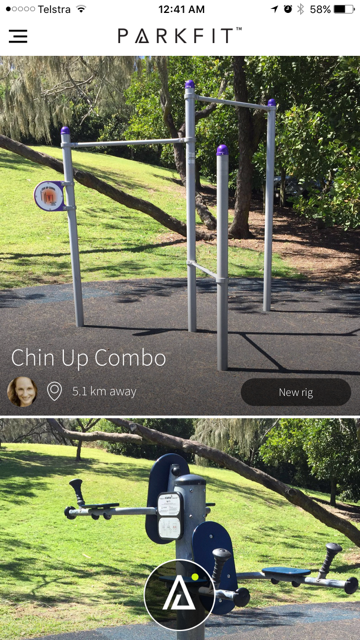 The mission? To stimulate Australia’s next generation of tech entrepreneurs.

The reality? An awesome gig for those lucky enough to still be under 25 years of age! 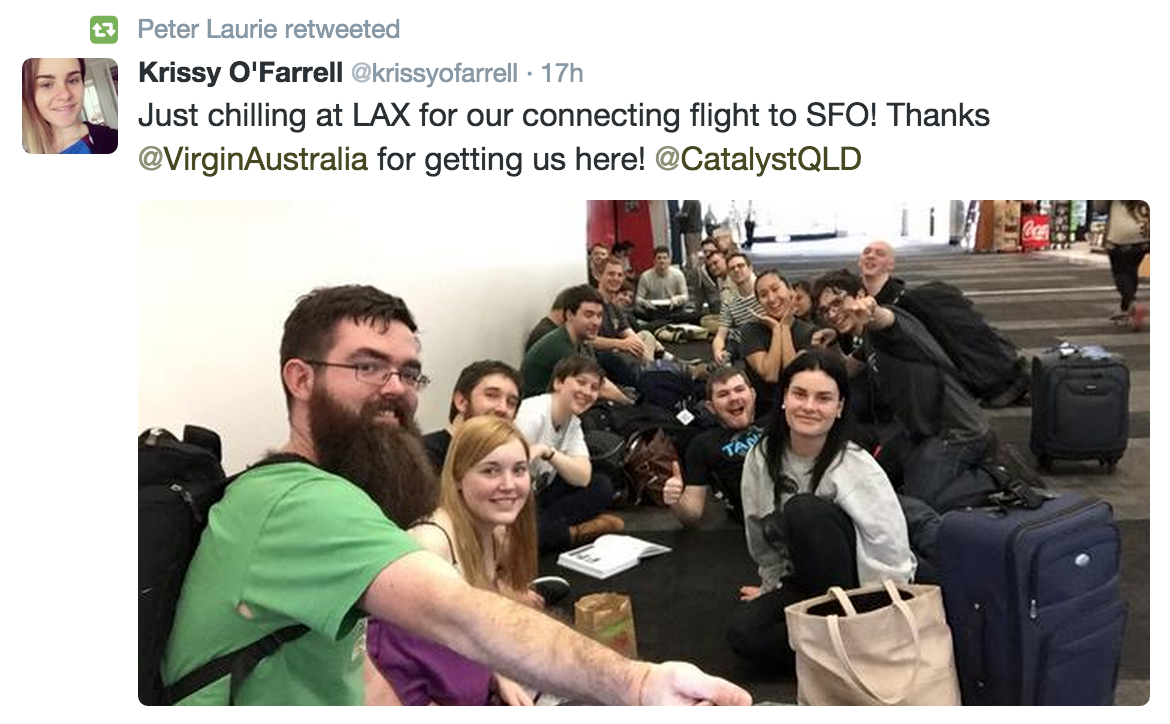 Puntaa have a new HQ

The Puntaa boys (Jordan, Damon and Nick), slept in their new home-away-from-River-City-Labs-home. Not sure why, but TV shows and movie names come to mind… Three’s-Company, Two-and-a-Half-Men, Three Men and a Baby (…is there something we should know, boys?).

Yes, this was the amazing view from Richard’s apartment on Saturday night for Brisbane’s night-of-nights, Riverfire. He may need a Ukrainian-flatmate-from-a-Gumtree-ad to help pay the rent (true!), but it’s worth it for a view like this, don’t you think? 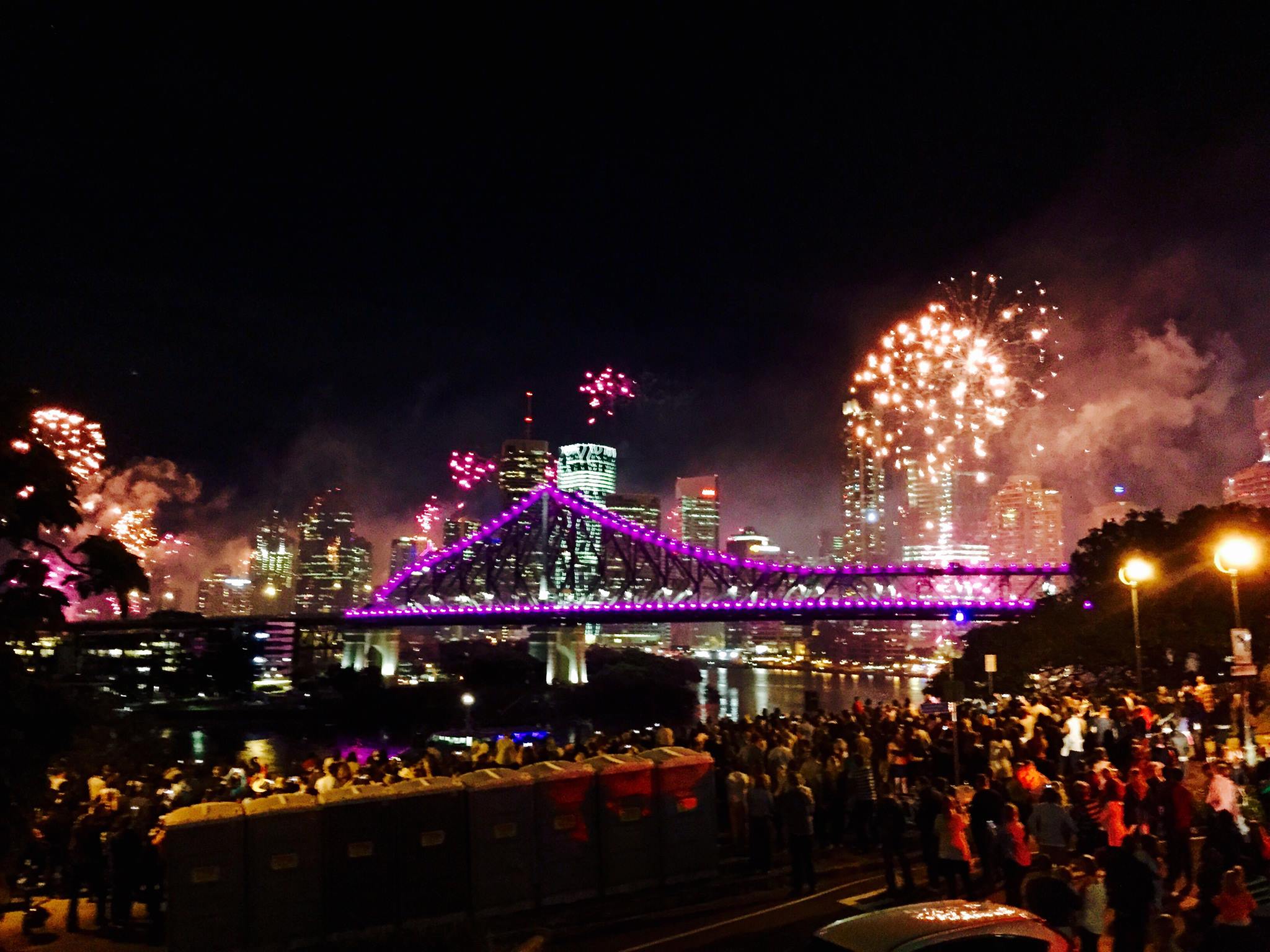 The Puntaa and Outbound guys witness the Broncos victory

Can you see the Puntaa and Outbound guys in the background? No, neither could we, but that’s where the guys were headed after Friday’s Open House. And with a glorious 31-12 preliminary NRL final win over the Sydney Roosters, they’re sure to have partied hard. 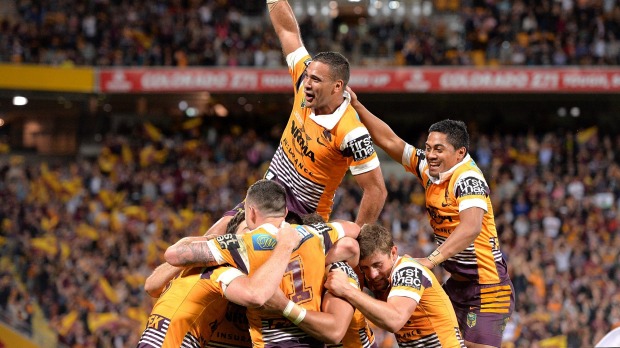 Yes, Shark Tank fans (like me) were excited to welcome guest Shark Ashton Kutcher into our homes over the weekend when season seven debuted on America’s ABC. It was business, inspiration and entertainment all wrapped into one. Loved it!

What about Matt Barrie?

Sadly, Matt Barrie didn’t make it in, as planned. But as you can see, we were pretty busy without him. But hopefully he’ll reschedule (hint, hint, Matt Barrie) for one of the 12 weeks we have left to go on our program. It would be awesome for each team to get some one-on-one time with someone as impressive in the Australian startup ecosystem as Matt.

That’s a wrap for week 2. Thanks Everyone for sharing your photos and anecdotes.

Have a fantastic week!