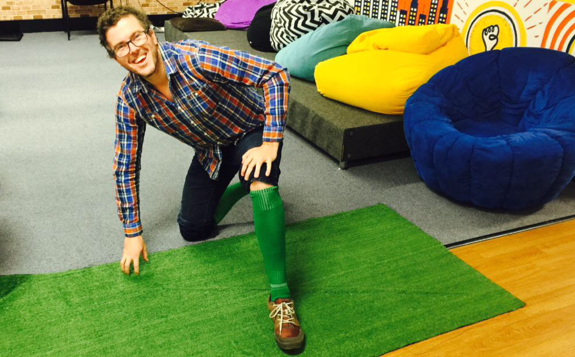 Okay, let’s try that again for our startup accelerator teams… Another week, another tranche of awesome presentations, priceless connections, and good ole’ startup fun. Here’s our GreenSocks wrap up of week 3 in the River City Labs (muru-D) startup accelerator: 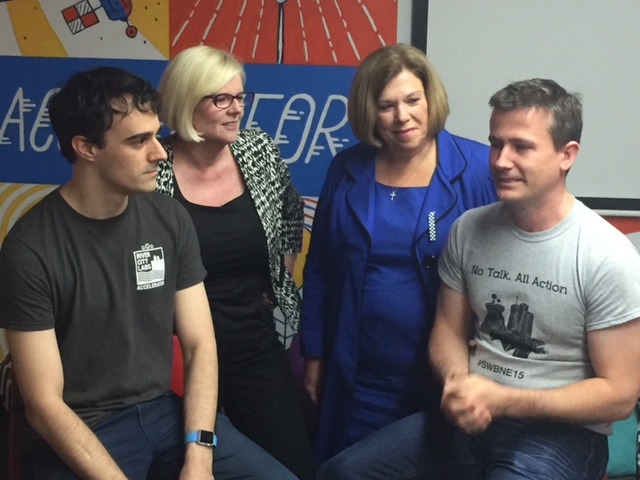 Interesting fact 1: Karen was one of only two female graduates in Mechanical Engineering at QUT in 1983. How awesome is that?

Interesting fact 2: Teresa’s daughter launched a her own startup venture this year – the funky Barber Girl shop in Bulimba, Brisbane.

Kuba Tymula of Harris Partners flew in from Sydney to deliver an awesome presentation on best-practice marketing, then spend one-on-one group time with each of the five teams (Outbound, ParkFit, Puntaa, ProcessPA and GreenSocks).

Despite getting off to a rocky start in the one-on-one session (…I recall his words to my co-founder Richard, our resident tech guy, were “You’ve got your tech wrong and need a new tech guy”), Kuba later redeemed himself (“sorry, I was quick to judge earlier and maybe you have it right after all”) and went on to give us an avalanche of awesome advice on our website offering. His was brilliant! 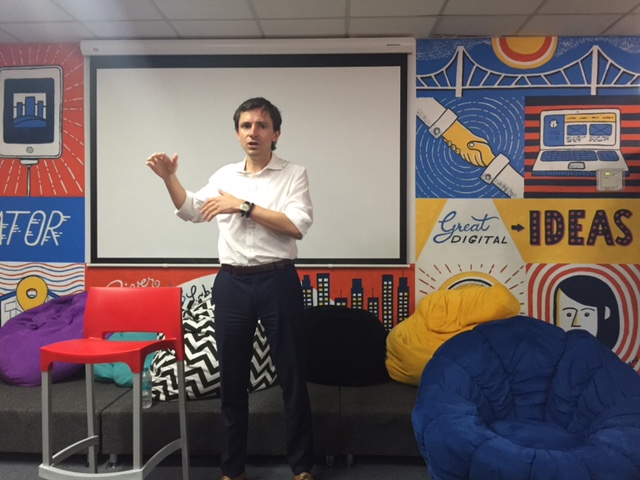 River City Labs resident Noelle Greenwood kindly donated her time to share her tips for conversion rate optimisation and consistent messaging across all of our marketing. 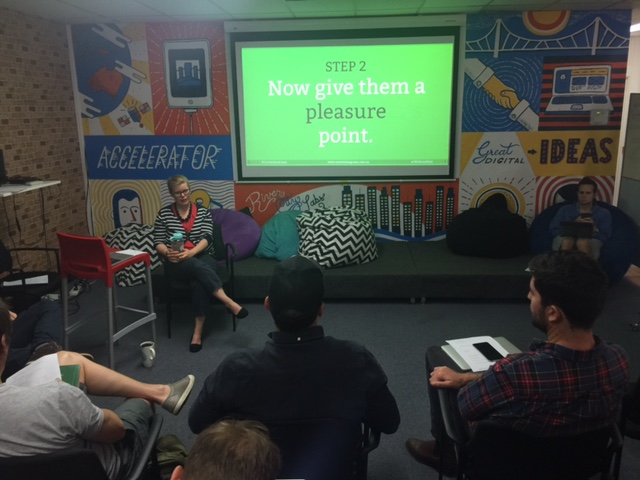 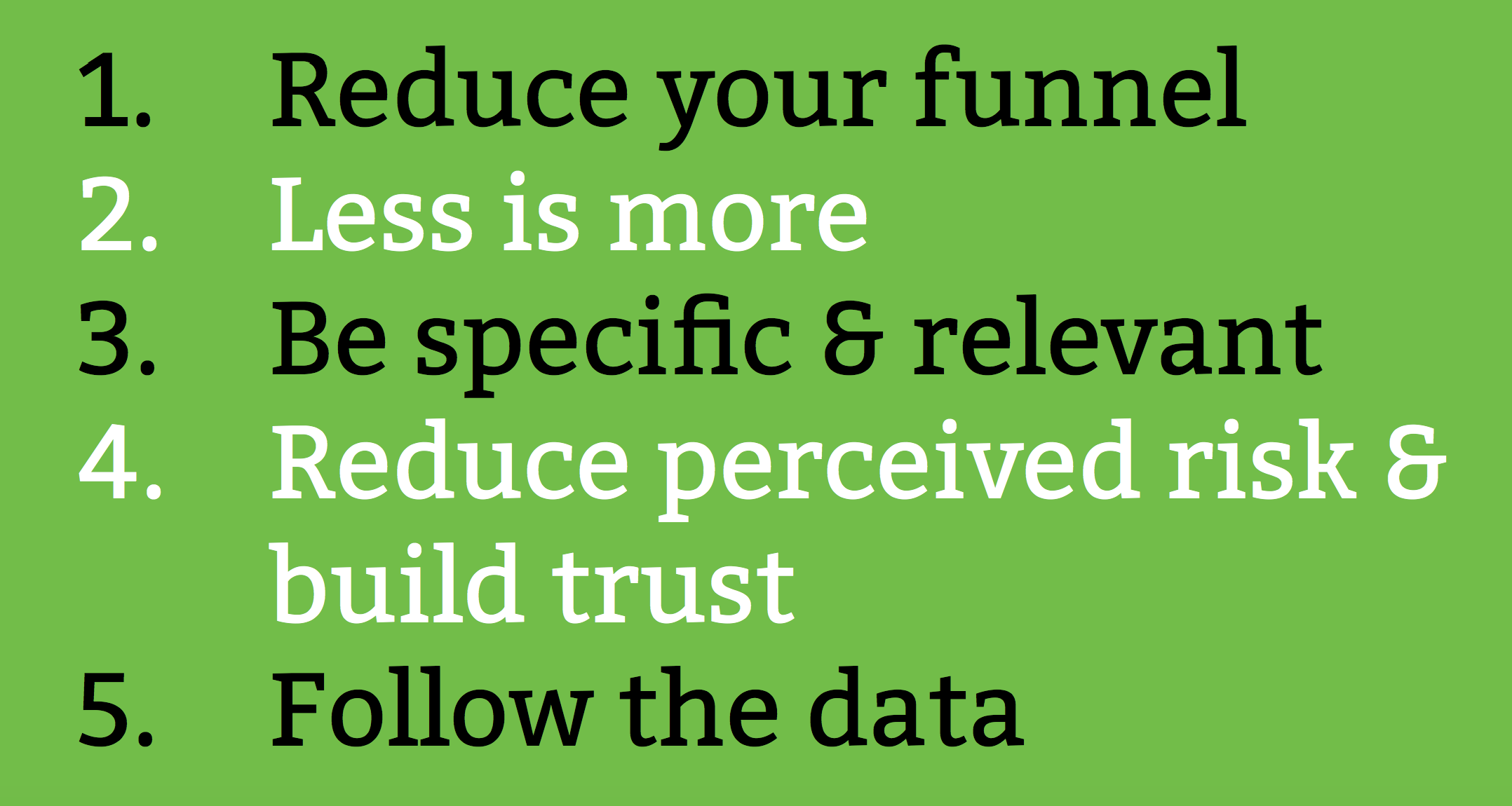 James Woollard, magic muru-D genie, flew in from Sydney and offered to grant each team three wishes, if he could find a connection for us in Telstra’s far-reaching network. So how did GreenSocks go?

GreenSocks: Can you get us access to Hamish and Andy?

GreenSocks: We’re wanting to tap into the upcoming Star Wars film release. Can we write a feature for the Telstra Exchange Blog about how Star Wars objects are like Aussie icons?

James: Arhhh, I don’t quite get it, but write it, and maybe someone else at Telstra will?

GreenSocks: Maybe it’s time we played the safe card… Can we talk to an expert from Telstra’s social media team about mistakes to avoid and tactics that have worked?

James: Phew, that I can do! 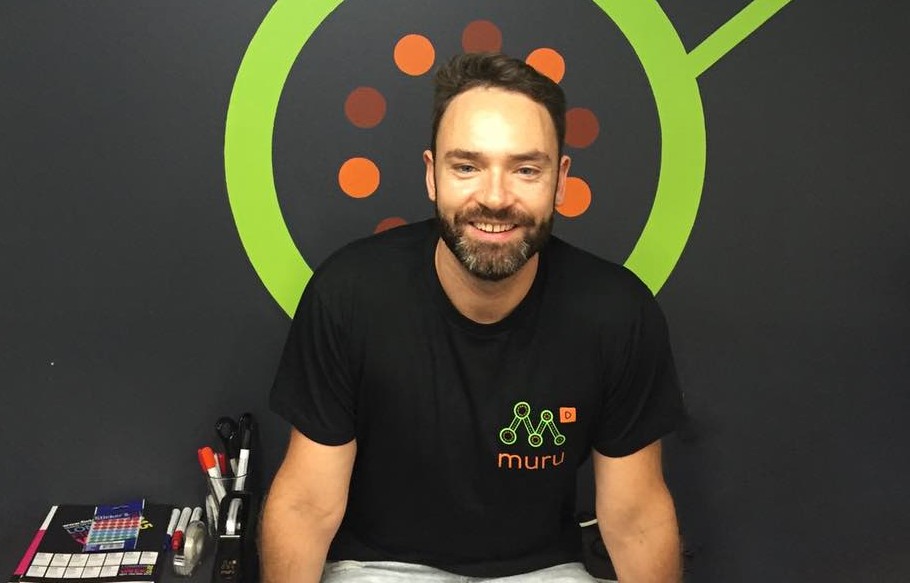 The kind folk at Telstra in Brisbane invited us up to their beautiful “4th floor” space for Telstra execs and key customers to meet the five accelerator teams, and vice-versa. 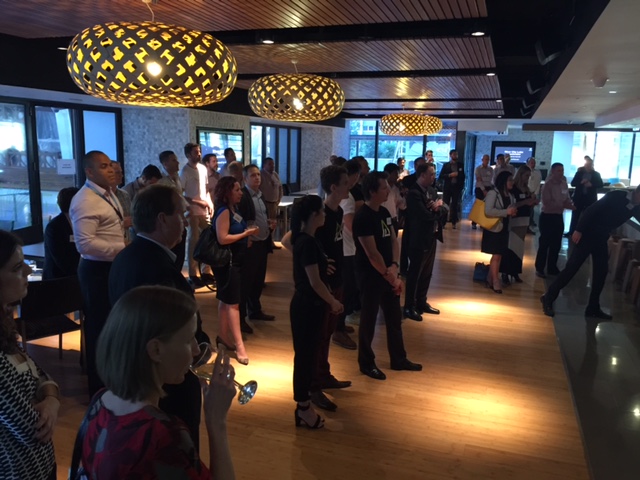 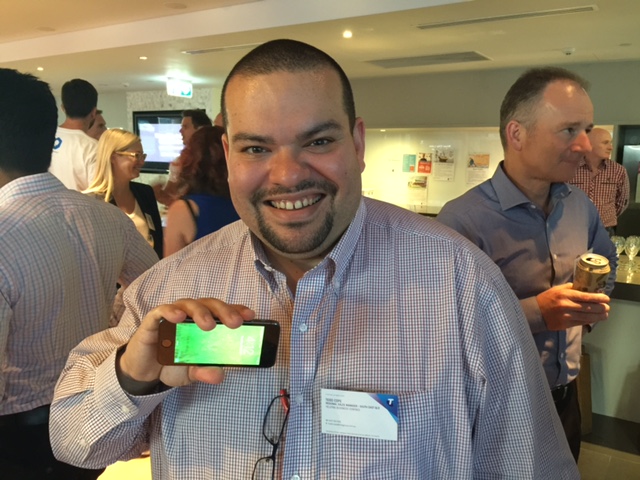 In official proceedings, GreenSocks pitched first, then ProcessPA and Puntaa. But it was around about the time that ParkFit pitched… 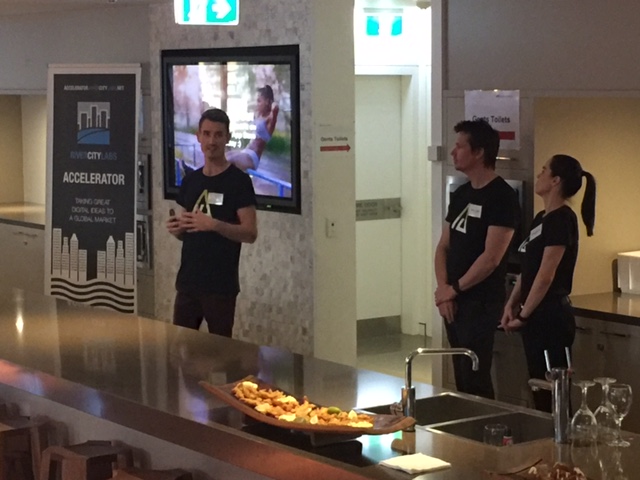 …when the catering crew delivered the most delicious arancini balls that I have ever tasted! 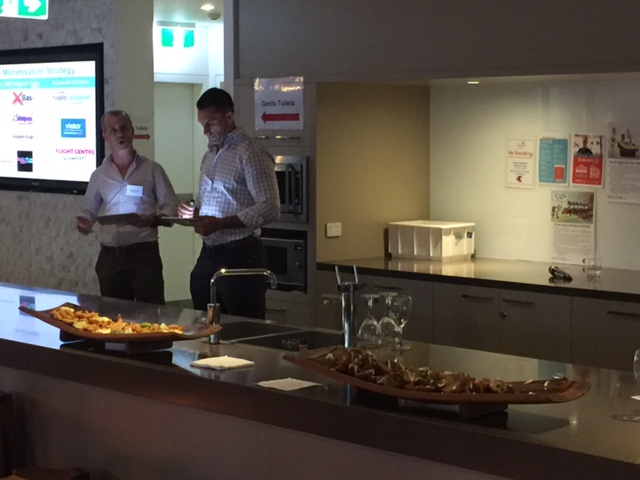 I had a wonderful time swapping expat stories with the gorgeous Jane Donnelly (who leads Telstra Countrywide – Queensland). Prior to Telstra, Jane was posted to Vienna and Thailand with G.E. 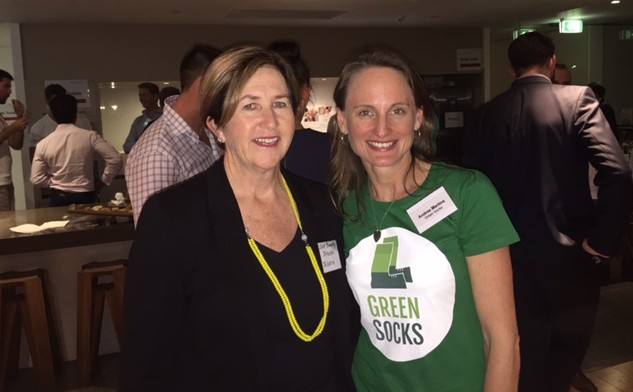 Shout out also to Telstra’s equally gorgeous Katelyn Springer for all her help at the event!

Downstairs after the event, while Richard was waiting for an Uber, Outbound app’s Mark Cantoni was in a rush to get to the Outbound backpackers’ event, so he attempted the bikes instead. Needless to say, it didn’t work so well, so Mark jumped in our Uber instead. 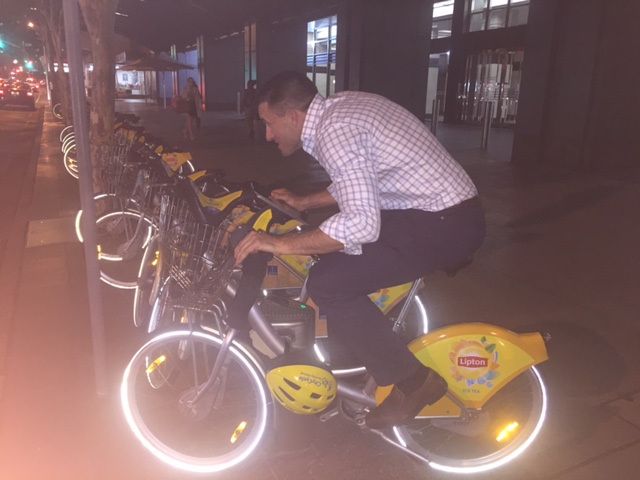 The Puntaa boys (and GreenSocks’ Richard, not pictured) were there to support Outbound: 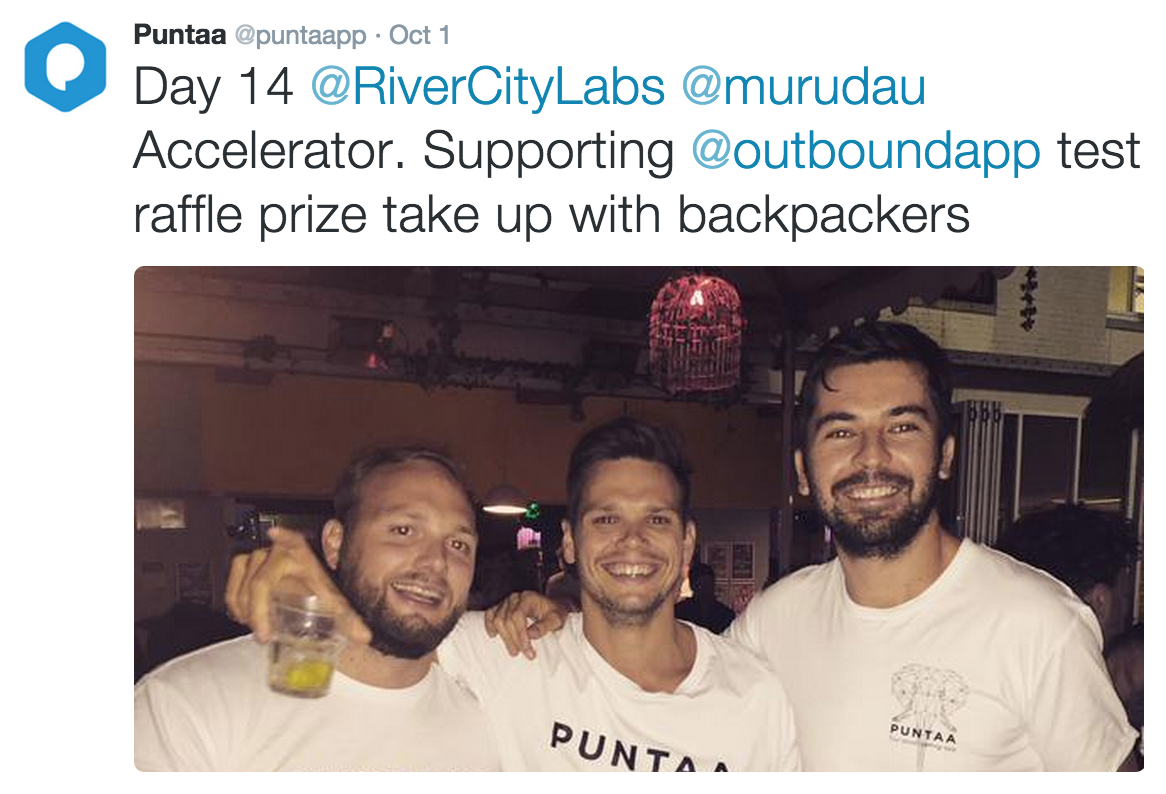 Another Friday, another reason to down tools and mingle with RCL residents, accelerator teams and visiting mentors, investors and startup enthusiasts! 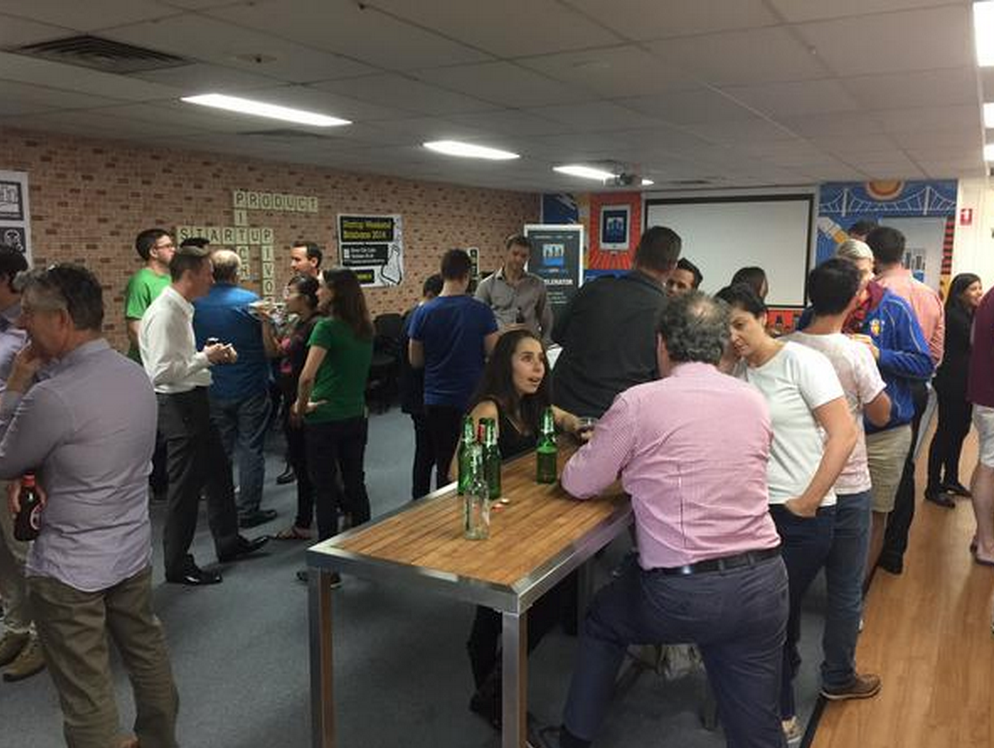 Huge congrats to Jordan, Damon and Nick from Puntaa! With their app now available on Android, they threw an AFL Grand Final party to get some bets rolling. 22 active users later and $800 now under management, the boys are away! Next step? The Apple store. Stay tuned.

The inaugural Puntaa app party for the AFL Grand final

Not sure how Ryan Hanly drew the short straw, but co-founder Mark Cantoni flew down to the NRL Grand Final “for research”. Yep, sure Mark! 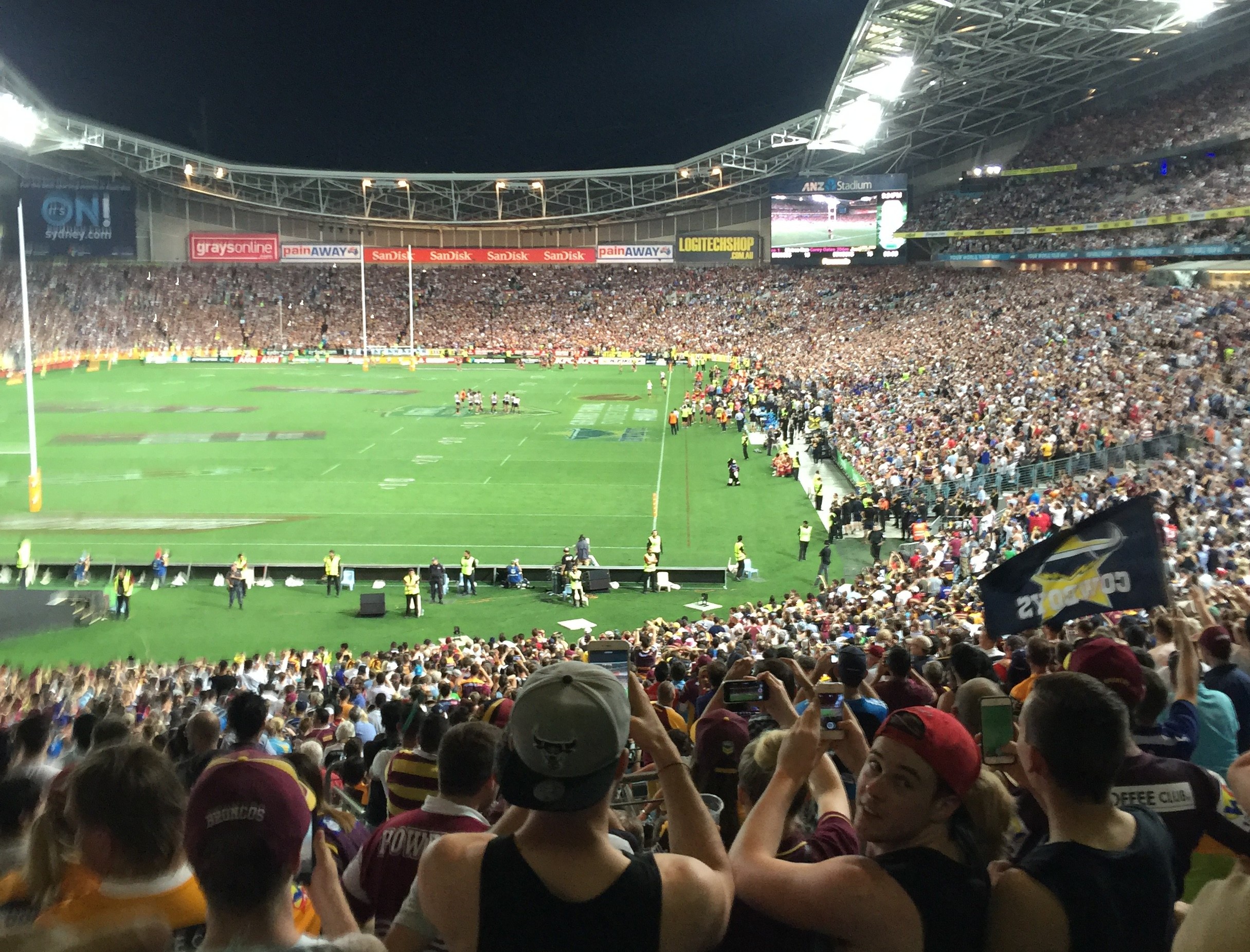 “Hey GreenSocks, did you mow this lawn?” says Mark Cantoni from Outbound at the NRL Grand Final

Meanwhile, I did some “research” on the quality of Sunshine Coast lawn mowing, whilst dancing to the Baby Animals, Hoodoo Gurus and Ben Lee – on the green lawns at the Caloundra Music Festival. 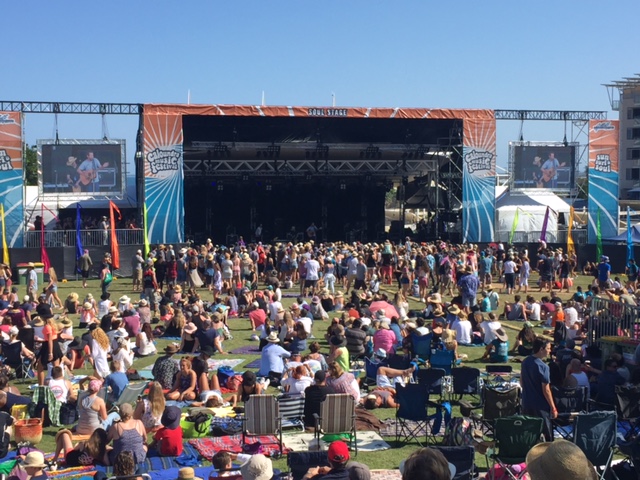 Finally, Founder of the week goes to… Matt Rowan

You know how Shark Tank US’s Mark Cuban loves founders who are “all in”?

Well, you won’t find anyone more “all in” than Matt Rowan. Because not only did Matt give up his high paying IT job to join the 14-week River City Labs startup accelerator, but he did so when he was jut 9 months (!) short of his long-service leave – and with 4 young children (all under 7 years of age) to feed.

Now, that’s dedication, and that’s probably also why Matt’s selling homemade honey around the office to make a dollar while he’s waiting for ProcessPA to launch.

If you see him around, pull out $10 and support the guy’s honey habit, won’t you? 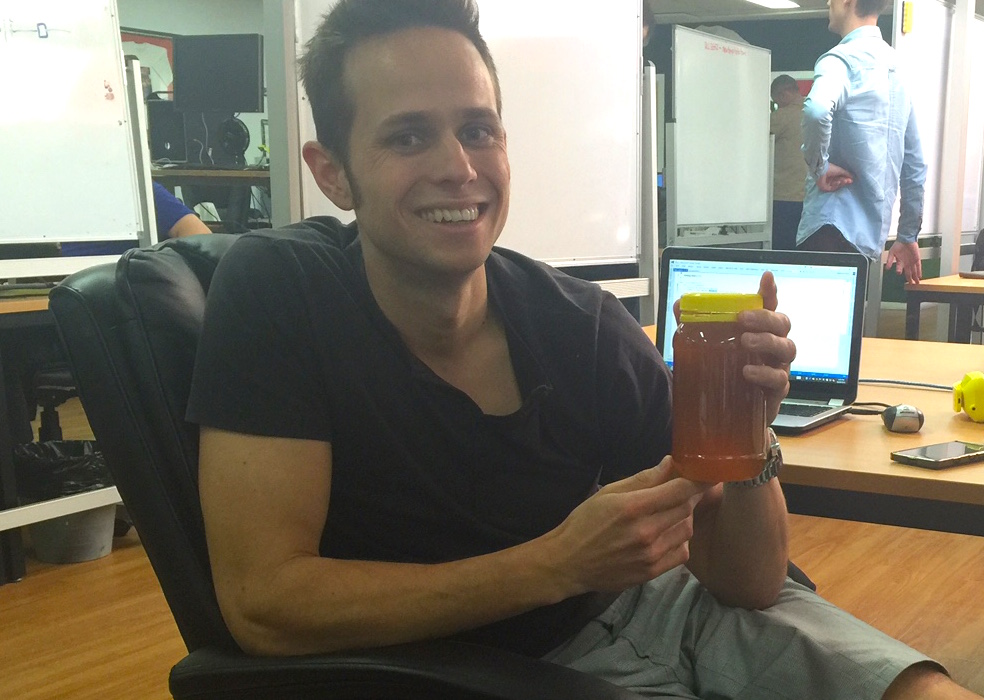 That’s it for our week 3 wrap up of our River City Labs accelerator program.

Stay tuned for our week 4 update…

Or jump back to our epic updates for week 1 and week 2.

Thanks for your support Everyone – and enjoy what’s left of your week!